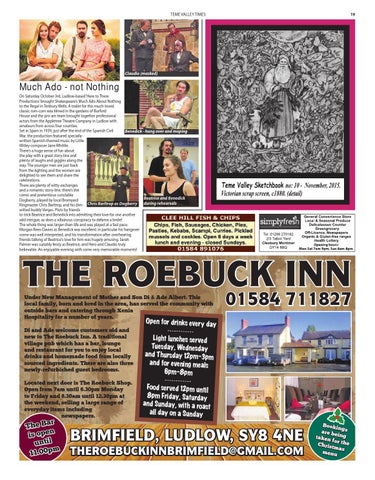 Much Ado - not Nothing On Saturday October 3rd, Ludlow-based ‘Here to There Productions’ brought Shakespeare’s Much Ado About Nothing to the Regal in Tenbury Wells. A trailer for this much-loved classic rom-com was filmed in the gardens of Burford House and the pro-am team brought together professional actors from the Appletree Theatre Company in Ludlow with amateurs from across four counties. Set in Spain in 1939, just after the end of the Spanish Civil Benedick - hung over and moping War, the production featured speciallywritten Spanish-themed music by Little Witley composer Jane Whittle. There’s a huge sense of fun about the play with a great story-line and plenty of laughs and giggles along the way. The younger men are just back from the fighting and the women are delighted to see them and share the celebrations. There are plenty of witty exchanges and a romantic story-line; there’s the comic and pretentious constable Beatrice and Benedick Dogberry, played by local Bromyard during rehearsals Ringmaster Chris Barltrop, and his dim- Chris Barltrop as Dogberry witted buddy Verges. Plots by friends to trick Beatrice and Benedick into admitting their love for one another add intrigue, as does a villainous conspiracy to defame a bride! The whole thing was larger-than-life and was played at a fast pace. Morgan Rees-Davies as Benedick was excellent; in particular his hangover scene was well interpreted, and his transformation after overhearing friends talking of Beatrice’s love for him was hugely amusing. Sarah Palmer was suitably feisty as Beatrice, and Hero and Claudio truly believable. An enjoyable evening with some very memorable moments!

The Roebuck Inn Under New Management of Mother and Son Di & Ade Albert. This local family, born and bred in the area, has served the community with outside bars and catering through Xenia Hospitality for a number of years. Di and Ade welcome customers old and new to The Roebuck Inn. A traditional village pub which has a bar, lounge and restaurant for you to enjoy local drinks and homemade food from locally sourced ingredients. There are also three newly-refurbished guest bedrooms. Located next door is The Roebuck Shop. Open from 7am until 6.30pm Monday to Friday and 8.30am until 12.30pm at the weekend, selling a large range of everyday items including newspapers.

Open for drinks ever y da

Light lunches served Tuesday, Wednesday and Thursday 12pm-3pm and for evening meals 6pm-8pm Food served 12pm until 8pm Friday, Saturday and Sunday, with a roast all day on a Sunday