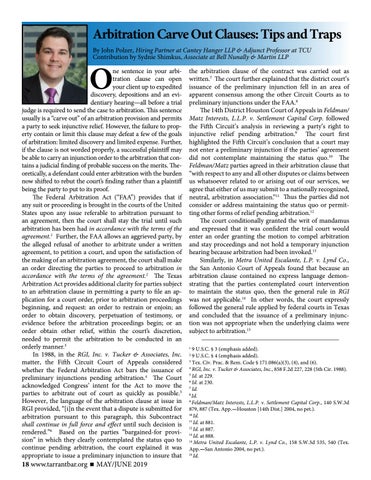 ne sentence in your arbitration clause can open your client up to expedited discovery, depositions and an evidentiary hearing—all before a trial judge is required to send the case to arbitration. This sentence usually is a “carve out” of an arbitration provision and permits a party to seek injunctive relief. However, the failure to property contain or limit this clause may defeat a few of the goals of arbitration: limited discovery and limited expense. Further, if the clause is not worded properly, a successful plaintiff may be able to carry an injunction order to the arbitration that contains a judicial finding of probable success on the merits. Theoretically, a defendant could enter arbitration with the burden now shifted to rebut the court’s finding rather than a plaintiff being the party to put to its proof. The Federal Arbitration Act (“FAA”) provides that if any suit or proceeding is brought in the courts of the United States upon any issue referable to arbitration pursuant to an agreement, then the court shall stay the trial until such arbitration has been had in accordance with the terms of the agreement.1 Further, the FAA allows an aggrieved party, by the alleged refusal of another to arbitrate under a written agreement, to petition a court, and upon the satisfaction of the making of an arbitration agreement, the court shall make an order directing the parties to proceed to arbitration in accordance with the terms of the agreement.2 The Texas Arbitration Act provides additional clarity for parties subject to an arbitration clause in permitting a party to file an application for a court order, prior to arbitration proceedings beginning, and request: an order to restrain or enjoin; an order to obtain discovery, perpetuation of testimony, or evidence before the arbitration proceedings begin; or an order obtain other relief, within the court’s discretion, needed to permit the arbitration to be conducted in an orderly manner.3 In 1988, in the RGI, Inc. v. Tucker & Associates, Inc. matter, the Fifth Circuit Court of Appeals considered whether the Federal Arbitration Act bars the issuance of preliminary injunctions pending arbitration.4 The Court acknowledged Congress’ intent for the Act to move the parties to arbitrate out of court as quickly as possible.5 However, the language of the arbitration clause at issue in RGI provided, “[i]n the event that a dispute is submitted for arbitration pursuant to this paragraph, this Subcontract shall continue in full force and effect until such decision is rendered.”6 Based on the parties “bargained-for provision” in which they clearly contemplated the status quo to continue pending arbitration, the court explained it was appropriate to issue a preliminary injunction to insure that

the arbitration clause of the contract was carried out as written.7 The court further explained that the district court’s issuance of the preliminary injunction fell in an area of apparent consensus among the other Circuit Courts as to preliminary injunctions under the FAA.8 The 14th District Houston Court of Appeals in Feldman/ Matz Interests, L.L.P. v. Settlement Capital Corp. followed the Fifth Circuit’s analysis in reviewing a party’s right to injunctive relief pending arbitration.9 The court first highlighted the Fifth Circuit’s conclusion that a court may not enter a preliminary injunction if the parties’ agreement did not contemplate maintaining the status quo.10 The Feldman/Matz parties agreed in their arbitration clause that “with respect to any and all other disputes or claims between us whatsoever related to or arising out of our services, we agree that either of us may submit to a nationally recognized, neutral, arbitration association.”11 Thus the parties did not consider or address maintaining the status quo or permitting other forms of relief pending arbitration.12 The court conditionally granted the writ of mandamus and expressed that it was confident the trial court would enter an order granting the motion to compel arbitration and stay proceedings and not hold a temporary injunction hearing because arbitration had been invoked.13 Similarly, in Metra United Escalante, L.P. v. Lynd Co., the San Antonio Court of Appeals found that because an arbitration clause contained no express language demonstrating that the parties contemplated court intervention to maintain the status quo, then the general rule in RGI was not applicable.14 In other words, the court expressly followed the general rule applied by federal courts in Texas and concluded that the issuance of a preliminary injunction was not appropriate when the underlying claims were subject to arbitration.15 9 U.S.C. § 3 (emphasis added). 9 U.S.C. § 4 (emphasis added). 3 Tex. Civ. Prac. & Rem. Code § 171.086(a)(3), (4), and (6). 4 RGI, Inc. v. Tucker & Associates, Inc., 858 F.2d 227, 228 (5th Cir. 1988). 5 Id. at 229. 6 Id. at 230. 7 Id. 8 Id. 9 Feldman/Matz Interests, L.L.P. v. Settlement Capital Corp., 140 S.W.3d 879, 887 (Tex. App.—Houston [14th Dist.] 2004, no pet.). 10 Id. 11 Id. at 881. 12 Id. at 887. 13 Id. at 888. 14 Metra United Escalante, L.P. v. Lynd Co., 158 S.W.3d 535, 540 (Tex. App.—San Antonio 2004, no pet.). 15 Id. 1 2 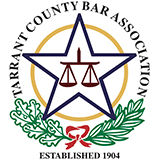 Take a look inside and see what's happening at the Tarrant County Bar Association.

Take a look inside and see what's happening at the Tarrant County Bar Association.