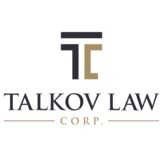 Real Estate, Business, and Bankruptcy Attorney in Riverside, California. Scott Talkov is the Founder of Talkov Law where the emphasis of his practice is in real estate, business and bankruptcy litigation. Before founding the firm, Scott became the youngest partner after six years of practice and was named Partner of the Year at on of the Inland Empire's oldest law firms. Scott has been named a Rising Star by Super Lawyers magazine for eight consecutive years from 2013 to 2020. Scott is the longest-standing Board Member in the Inland Empire Bankruptcy Forum and was twice elected as President of the Riverside County Barristers (Young Attorneys’) Association. Scott is active in the Pick Group of Riverside Young Professionals and Riverside County Bar Association. Scott graduated cum laude from Washington University in St. Louis School of Law, where he was a member of the Board of Editors for the Washington University Law Review. https://www.talkovlaw.com