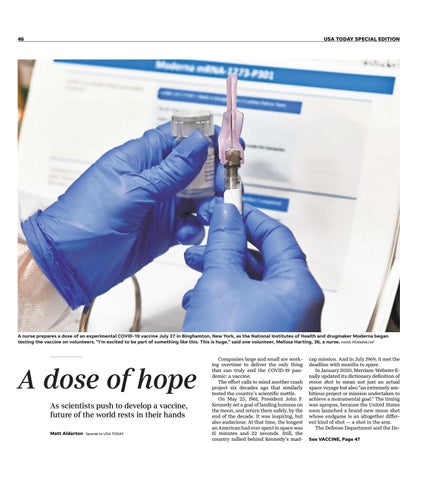 A nurse prepares a dose of an experimental COVID-19 vaccine July 27 in Binghamton, New York, as the National Institutes of Health and drugmaker Moderna began testing the vaccine on volunteers. “I’m excited to be part of something like this. This is huge,” said one volunteer, Melissa Harting, 36, a nurse. HANS PENNINK/AP

A dose of hope As scientists push to develop a vaccine, future of the world rests in their hands Matt Alderton

Companies large and small are working overtime to deliver the only thing that can truly end the COVID-19 pandemic: a vaccine. The eﬀort calls to mind another crash project six decades ago that similarly tested the country’s scientiﬁc mettle. On May 25, 1961, President John F. Kennedy set a goal of landing humans on the moon, and return them safely, by the end of the decade. It was inspiring, but also audacious: At that time, the longest an American had ever spent in space was 15 minutes and 22 seconds. Still, the country rallied behind Kennedy’s mad-

cap mission. And in July 1969, it met the deadline with months to spare. In January 2020, Merriam-Webster ﬁnally updated its dictionary deﬁnition of moon shot to mean not just an actual space voyage but also “an extremely ambitious project or mission undertaken to achieve a monumental goal.” The timing was apropos, because the United States soon launched a brand-new moon shot whose endgame is an altogether diﬀerent kind of shot — a shot in the arm. The Defense Department and the DeSee VACCINE, Page 47