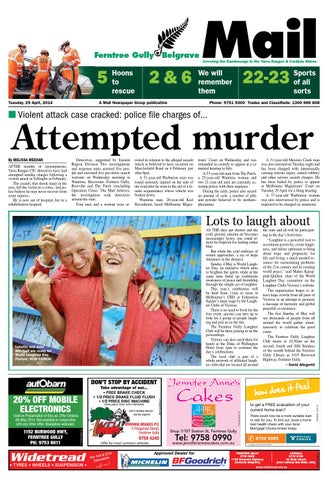 Mail Covering the Dandenongs in the Yarra Ranges & Cardinia Shires

We will remember them

Sports of all sorts

Attempted murder By MELISSA MEEHAN AFTER months of investigations, Yarra Ranges CIU detectives have laid attempted murder charges following a violent attack in Yellingbo in February. The assault, that shook many in the area, left the victim in a coma - and police believe he may never recover from some injuries. He is now out of hospital, but in a rehabilitation hospital.

rested in relation to the alleged assault which is believed to have occurred on Macclesfield Road on 4 February just after 6pm. A 51-year-old Warburton man was found seriously injured on the side of the road after he went to the aid of a female acquaintance whose vehicle was broken down. Wantirna man, 28-year-old Karl Ravenhorst, faced Melbourne Magis-

trates’ Court on Wednesday and was remanded in custody to appear at a co mmital hearing in July. A 53-year-old man from The Patch, a 25-year-old Wantirna woman and two 21-year-old men are currently assisting police with their inquiries. During the raids, police also seized an amount of cash, a number of pills and powder believed to be methamphetamine.

A 31-year-old Menzies Creek man was also arrested on Tuesday night and has been charged with intentionally causing serious injury, armed robbery and other serious assault charges. He has been bailed by police to appear at Melbourne Magistrates’ Court on Tuesday 29 April for a filing hearing. A 37-year-old Warburton woman was also interviewed by police and is expected to be charged on summons.

Lots to laugh about AS THE days get shorter and the cold, gloomy autumn air becomes increasingly frosty, one could almost be forgiven for feeling rather blue. But while the cold embrace of winter approaches, a ray of hope shimmers in the distance. Sunday 4 May is World Laughter Day, an initiative which aims to brighten the spirits while at the same time build up worldwide awareness of peace and friendship through the simple act of laughter. This year’s celebration will be held from 11am to noon in Melbourne’s CBD at Federation Square’s main stage by the Laughter Clubs of Victoria. There is no need to book for the free event, anyone can turn up to look for a group of people laughing and join in on the fun. The Ferntree Gully Laughter Club will be there joining in on the proceedings. Visitors can also catch them for lunch at the Duke of Wellington Hotel from 1pm to continue the day’s celebrations. The local club is part of a whole network of affiliated laughter clubs that are located all around

There could now be a more suitable loan or rate for you. To find out, book a home loan health check with your local Mortgage Choice broker today.

Don’t monkey around see the experts

Valid on Presentation of this ad. Offer finishes 4th May 2014. Not available in conjunction with any other offer. Navigation excluded.

to get a FREE evaluation of your current home loan?

(AVAILABLE ONLY WITH REPAIRS)

the state and all will be participating in the day’s festivities. “Laughter is a powerful tool to accentuate positivity, create happiness, and infuse optimism to bring about hope and propensity for life and living, a much needed resource for surmounting problems of the 21st century and in creating world peace,” said Mahes Karuppiah-Quillen, chair of the World Laughter Day committee on the Laughter Clubs Victoria’s website. The organisation hopes to attract large crowds from all parts of Victoria in an attempt to promote a message of harmony and global peaceful co-existence. The first Sunday of May will see thousands of people from all around the world gather simultaneously to celebrate the good cause. The Ferntree Gully Laughter Club meets at 10.30am on the second, fourth and fifth Sundays of the month behind the Ferntree Gully Library at 1010 Burwood Highway, Ferntree Gully. – David Allegretti