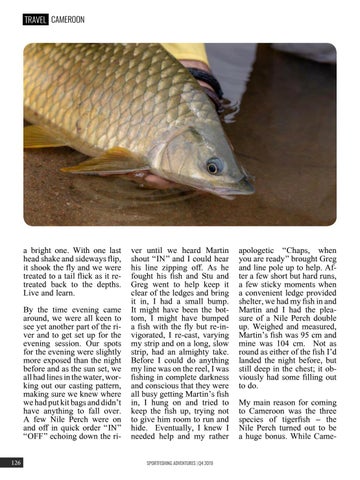 a bright one. With one last head shake and sideways flip, it shook the fly and we were treated to a tail flick as it retreated back to the depths. Live and learn. By the time evening came around, we were all keen to see yet another part of the river and to get set up for the evening session. Our spots for the evening were slightly more exposed than the night before and as the sun set, we all had lines in the water, working out our casting pattern, making sure we knew where we had put kit bags and didn’t have anything to fall over. A few Nile Perch were on and off in quick order “IN” “OFF” echoing down the ri126

ver until we heard Martin shout “IN” and I could hear his line zipping off. As he fought his fish and Stu and Greg went to help keep it clear of the ledges and bring it in, I had a small bump. It might have been the bottom, I might have bumped a fish with the fly but re-invigorated, I re-cast, varying my strip and on a long, slow strip, had an almighty take. Before I could do anything my line was on the reel, I was fishing in complete darkness and conscious that they were all busy getting Martin’s fish in, I hung on and tried to keep the fish up, trying not to give him room to run and hide. Eventually, I knew I needed help and my rather SPORTFISHING ADVENTURES | Q4 2019

apologetic “Chaps, when you are ready” brought Greg and line pole up to help. After a few short but hard runs, a few sticky moments when a convenient ledge provided shelter, we had my fish in and Martin and I had the pleasure of a Nile Perch double up. Weighed and measured, Martin’s fish was 95 cm and mine was 104 cm. Not as round as either of the fish I’d landed the night before, but still deep in the chest; it obviously had some filling out to do. My main reason for coming to Cameroon was the three species of tigerfish – the Nile Perch turned out to be a huge bonus. While Came-