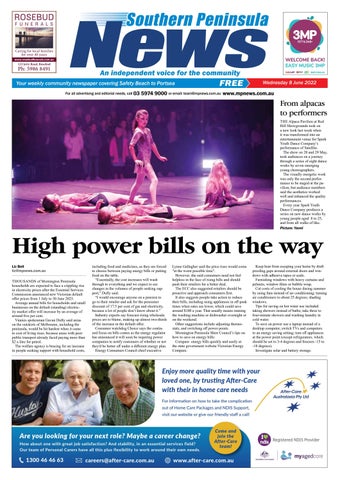 Southern Peninsula Caring for local families for over 40 years www.rosebudfunerals.com.au

From alpacas to performers THE Alpaca Pavilion at Red Hill Showgrounds took on a new look last week when it was transformed into an entertainment venue for Spark Youth Dance Company’s performance of Satellite. The show on 28 and 29 May, took audiences on a journey through a series of eight dance works by seven emerging young choreographers. The visually energetic work was only the second performance to be staged at the pavilion, but audience members said the aesthetics worked well and enhanced the quality performances. Every year Spark Youth Dance Company produces a series on new dance works by young people aged 8 to 25, and from all walks of like. Picture: Yanni

High power bills on the way Liz Bell liz@mpnews.com.au THOUSANDS of Mornington Peninsula households are expected to face a crippling rise in electricity prices after the Essential Services Commission announced new Victorian default offer prices from 1 July to 30 June 2023. Average annual bills for households and small businesses on the default (standing) electricity market offer will increase by an average of around five per cent. Vinnies spokesman Gavan Dufty said areas on the outskirts of Melbourne, including the peninsula, would be hit hardest when it came to cost of living rises, because areas with poor public transport already faced paying more than $2 a litre for petrol. The welfare agency is bracing for an increase in people seeking support with household costs,

including food and medicines, as they are forced to choose between paying energy bills or putting food on the table. “Essentially, the cost increases will wash through to everything and we expect to see changes in the volumes of people seeking support,” Dufty said. “I would encourage anyone on a pension to go to their retailer and ask for the pensioner discount of 17.5 per cent of gas and electricity, because a lot of people don’t know about it.” Industry experts say forecast rising wholesale prices are to blame, making up almost two-thirds of the increase in the default offer. Consumer watchdog Choice says the continued focus on bills comes as the energy regulator has announced it will soon be requiring power companies to notify customers of whether or not they&#39;d be better off under a different energy plan. Energy Consumers Council chief executive

Lynne Gallagher said the price rises would come &quot;at the worst possible time&quot;. However, she said consumers need not feel helpless in the face of rising bills and should push their retailers for a better deal. The ECC also suggested retailers should be proactive and approach consumers first. It also suggests people take action to reduce their bills, including using appliances in off-peak times when rates are lower, which could save around $100 a year. That usually means running the washing machine or dishwasher overnight or on the weekend. Other suggestions include adjusting thermostats, and switching off power points Mornington Peninsula Shire Council’s tips on how to save on energy bills: Compare energy bills quickly and easily at the state government website Victorian Energy Compare.

Keep heat from escaping your home by draft proofing gaps around external doors and windows with adhesive tapes or seals. Furnishing windows with heavy curtains and pelmets, window films or bubble wrap. Cut costs of cooling the house during summer by using fans instead of air conditioning; turning air conditioners to about 25 degrees; shading windows. Tips for saving on hot water use included taking showers instead of baths; take three to four-minute showers and washing laundry in cold water. To save on power use a laptop instead of a desktop computer; switch TVs and computers to an energy saving setting; turn off appliances at the power point (except refrigerators, which should be set to 3-4 degrees and freezers -15 to -18 degrees). Investigate solar and battery storage.

Enjoy more quality time with your loved one, by trusting After-Care with their in home care needs For information on how to take the complication out of Home Care Packages and NDIS Support, visit our website or give our friendly staff a call!

Are you looking for your next role? Maybe a career change? How about one with great job satisfaction? And stability, in an essential services field? Our team of Personal Carers have all this plus flexibility to work around their own needs.

Come and join the After-Care team!