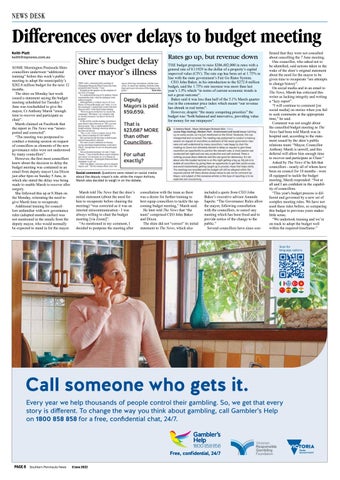 Differences over delays to budget meeting Keith Platt keith@mpnews.com.au SOME Mornington Peninsula Shire councillors underwent “additional training” before this week’s public meeting to adopt the municipality’s $282.8 million budget for the next 12 months. The shire on Monday last week issued a statement saying the budget meeting scheduled for Tuesday 7 June was rescheduled to give the mayor, Cr Anthony Marsh “enough time to recover and participate as chair”. Marsh claimed on Facebook that the report in The News was “misreported and corrected”. “The meeting was postponed to conduct a training session on request of councillors as elements of the new governance rules were not understood by many councillors”. However, the first most councillors knew about the decision to delay the budget meeting was contained in an email from deputy mayor Lisa Dixon just after 6pm on Sunday 5 June, in which she stated the delay was being made to enable Marsh to recover after surgery. She followed this up at 9.30am on the Monday, reiterating the need to give Marsh time to recuperate. Additional training for councillors unfamiliar with new governance rules (adopted months earlier) was not mentioned in the emails from the deputy mayor, who would normally be expected to stand in for the mayor.

Rates go up, but revenue down THE budget proposes to raise $206,482,000 in rates with a general rate of 0.11929 in the dollar of a property’s capital improved value (CIV). The rate cap has been set at 1.75% in line with the state government’s Fair Go Rates System. CEO John Baker, in his introduction to the $272.8 million budget, said the 1.75% rate increase was more than last year’s 1.5% which “in terms of current economic trends is not a great outcome”. Baker said it was less than half of the 5.1% March quarter rise in the consumer price index which meant “our revenue has shrunk in real terms”. However, despite “the many competing priorities” the budget was “both balanced and innovative, providing value for money for our ratepayers”.

Social comment: Questions were raised on social media about the deputy mayor’s role, while the mayor Anthony Marsh also decided to weigh in on the debate.

Marsh told The News that the shire’s initial statement (about the need for him to recuperate before chairing the meeting) “was corrected as it was an internal miscommunication - I was always willing to chair the budget meeting [via Zoom]”. “As mentioned in my comment, I decided to postpone the meeting after

consultation with the team as there was a desire for further training to best equip councillors to tackle the upcoming budget meeting,” Marsh said. He later told The News that “the team” comprised CEO John Baker and Dixon. The shire did not “correct” its initial statement to The News, which also

included a quote from CEO John Baker’s executive advisor Amanda Sapolu: “The Governance Rules allow the mayor, following consultation with the councillors, to cancel any meeting which has been fixed and to provide notice of the change to the public.” Several councillors have since con-

firmed that they were not consulted about cancelling the 7 June meeting. One councillor, who asked not to be identified, said actions taken in the wake of the shire’s original statement about the need for the mayor to be given time to recuperate “are attempts to change history”. On social media and in an email to The News, Marsh has criticised this writer as lacking integrity and writing a “lazy report”. “I will continue to comment [on social media] on stories when you fail to seek comments at the appropriate time,” he said. Comment was not sought about the cancelled budget meeting as The News had been told Marsh was in hospital and, according to the statement issued by the shire’s public relations team: “Mayor, Councillor Anthony Marsh is unwell, and this deferral will allow him enough time to recover and participate as Chair.” Asked by The News if he felt that councillors - nearly all of whom have been on council for 18 months - were ill equipped to tackle the budget meeting, Marsh responded: “Not at all and I am confident in the capability of councillors. “This year&#39;s budget process is different and governed by a new set of complex meeting rules. We have not used these rules before, so comparing this budget to previous years makes little sense. “We undertook training and we’re on track to adopt the budget well within the required timeframe.”

Call someone who gets it. Every year we help thousands of people control their gambling. So, we get that every story is different. To change the way you think about gambling, call Gambler’s Help on 1800 858 858 for a free, confidential chat, 24/7.