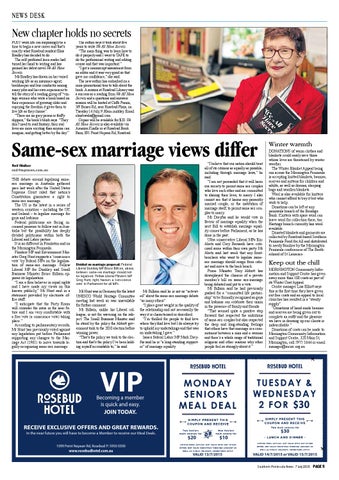 New chapter holds no secrets POST work life can surprisingly be a time to begin a new career and that’s exactly what Rosebud resident Elsie Bradley has decided to do. The self-professed keen reader had turned her hand to writing and has penned her debut novel We All Have Secrets. Ms Bradley has drawn on her varied working life as an insurance agent, bookkeeper and bus conductor among many jobs and her own experiences to tell the story of a reading group of “vintage women who write a book based on their experience of growing older and enjoying the freedom it gives them to live life as they choose”. “There are no grey perms or fluffy slippers,” the book’s blurb says. “They don’t need to read fantasy; their real lives are more exciting than anyone can imagine, and getting better by the day.”

The author says it took about five years to write We All Have Secrets. “The main thing was to learn how to do it properly and I went to TAFE to do the professional writing and editing course and that was important.” “I got a manuscript assessment from an editor and it was very good so that gave me confidence,” she said. The new author has embarked on a mini-promotional tour to talk about the book. A session at Rosebud Library was a success so a reading from We All Have Secrets and a questions and answers session will be hosted at Caffe Panini, 3/9 Boneo Rd, near Rosebud Plaza, on Tuesday 14 July, 9.30am-midday. Email elsiebwahs@gmail.com Copies will be available for $20. We All Have Secrets is also available via Amazon Kindle or at Rosebud Book Barn, 891 Point Nepean Rd, Rosebud.

Same-sex marriage views differ Neil Walker neil@mpnews.com.au THE debate around legalising samesex marriage in Australia gathered pace last week after the United States Supreme Court ruled that nation’s Constitution guarantees a right to same-sex marriage. The US is the latest in a series of western countries – including the UK and Ireland – to legalise marriage for gays and lesbians. Federal politicians are facing increased pressure to follow suit in Australia but the possibility has deeply divided politicians within both the Liberal and Labor parties. It is no different in Frankston and on the Mornington Peninsula. Flinders MP and Environment Minister Greg Hunt supports a ‘conscience vote’ by federal MPs on the legalisation of same-sex marriage. Fellow Liberal MP for Dunkley and Small Business Minister Bruce Billson opposes its legalisation. “I am a firm believer in equal rights and I have made my views on this known publicly,” Mr Hunt said in a statement provided by electorate office staff. “I anticipate that the Party Room will consider the issue in the near future and I am very comfortable with a free vote (a conscience vote) taking place.” According to parliamentary records, Mr Hunt has previously voted against any legislation put before Parliament supporting any changes to the Marriage Act (1961) to move towards legally recognising same-sex marriage.

Mr Hunt was in Germany for the latest UNESCO World Heritage Committee meeting last week so was unavailable for further comment. Mr Billson, unlike his Liberal colleague, is not for wavering on the subject. The Small Business Minister said he stood by the policy the Abbott government took to the 2010 election before winning power. “That’s the policy we took to the election and that’s the policy I’ve been holding myself accountable to,” he said.

Mr Billson said he is not as “activated” about the same-sex marriage debate “as many others”. “I place great weight in the quality of the relationship and not necessarily the way it is characterised or described. “I’m thrilled for people to find love where they find love but I do always try to uphold my undertakings and that was an undertaking I gave.” Isaacs federal Labor MP Mark Dreyfus said he is “a long-standing supporter” of marriage equality.

“I believe that our nation should treat all of its citizens as equally as possible, including through marriage laws,” he said. “I am not persuaded that it will harm our society to permit same sex couples who love each other and are committed to sharing their lives, to marry. I also cannot see that it harms any presently married couple, or the institution of marriage itself, to permit same sex couples to marry. Mr Dreyfus said he would vote in favour of marriage equality when the next Bill to establish marriage equality comes before Parliament, as he has done in the past. Ultra conservative Liberal MPs Eric Abetz and Cory Bernardi have criticised some within their own party. Mr Abetz said last week that any frontbenchers who want to legalise samesex marriage should resign from cabinet and move to the back bench. Prime Minister Tony Abbott has downplayed the chances of a private member’s bill on same sex-marriage being debated and put to a vote. Mr Billson said he had previously pushed for a “committed life partnership” to be formally recognised so gays and lesbians can celebrate their union in the presence of family and friends. “That seemed quite a positive step forward that respected the ambitions of same-sex couples but also respected the deep and long-standing feelings that others have that marriage is a commitment between a man and a woman and there’s a whole range of traditional religious and other reasons why other people feel so strongly about it.”

Winter warmth DONATIONS of warm clothes and blankets could easily save those whose lives are threatened by winter weather. The Winter Blanket Appeal being run across the Mornington Peninsula is accepting knitted blankets, beanies, scarves and mittens for children and adults, as well as doonas, sleeping bags and woollen blankets. Wool is also available for knitters who cannot afford to buy it but who wish to help. Donations can be left at any peninsula branch of the Bendigo Bank. Knitters with spare wool can leave wool for collection there, too. Hastings branch currently has wool available. Donated blankets and garments are collected by Rosebud-based Southern Peninsula Food for All and distributed to needy families by the Mornington Peninsula conferences of The Brotherhood of St Laurence.

Keep out the chill MORNINGTON Community Information and Support Centre has given away more than 100 coats as part of its Winter Coat Appeal. Centre manager Lisa Elliott says this is the first time they have given out free coats and an appeal to local churches has resulted in a “steady supply”. “Donations of hand-made beanies and scarves are being given out to complete an outfit and the pleasure we have in dressing up our clients is indescribable.” Donations of coats can be made to Mornington Community Information and Support Centre, 320 Main St, Mornington, call 5975 1644 or email: manager@mcisc.org.au

Becoming a member is quick and easy.

In the near future you will have to become a Member to receive our Meal Deals.