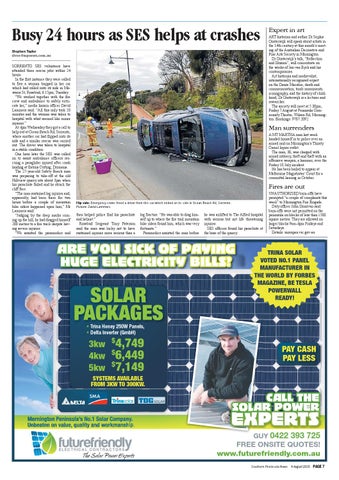 Busy 24 hours as SES helps at crashes Stephen Taylor steve@mpnews.com.au SORRENTO SES volunteers have attended three rescue jobs within 24 hours. In the first instance they were called to free a woman trapped in her car which had rolled onto its side in Mawarra St, Rosebud, 6.15pm, Tuesday. â&amp;#x20AC;&amp;#x153;We worked together with the fire crew and ambulance to safely extricate her,â&amp;#x20AC;? media liaison officer David Lammers said. â&amp;#x20AC;&amp;#x153;All this only took 10 minutes and the woman was taken to hospital with what seemed like minor injuries.â&amp;#x20AC;? At 4pm Wednesday they got a call to help out at Ocean Beach Rd, Sorrento, where another car had flipped onto its side and a similar rescue was carried out. The driver was taken to hospital in a stable condition. One hour later the SES was called on to assist ambulance officers rescuing a paraglider injured after crash landing at Eatons Cutting, Dromana. The 27-year-old Safety Beach man was preparing to take-off at the old Hillview quarry site about 3pm when his parachute failed and he struck the cliff face. â&amp;#x20AC;&amp;#x153;The man sustained leg injuries and, apparently, had been there for two hours before a couple of mountain bike riders happened upon him,â&amp;#x20AC;? Mr Lammers said. â&amp;#x20AC;&amp;#x153;Judging by the deep marks coming up the hill, he had dragged himself 200 metres to a fire track despite having severe injuries. â&amp;#x20AC;&amp;#x153;We assisted the paramedics and

Expert in art ART historian and author Dr Sophie Oosterwijk will speak about artists in the 14th century at this monthâ&amp;#x20AC;&amp;#x2122;s meeting of the Australian Decorative and Fine Arts Society in Mornington. Dr Oosterwijkâ&amp;#x20AC;&amp;#x2122;s talk, â&amp;#x20AC;&amp;#x153;Reflection and Illusionâ&amp;#x20AC;?, will concentrate on the works of Jan van Eyck and his contemporaries. Art historian and medievalist; internationally recognised expert on the Danse Macabre, death and commemoration, tomb monuments, iconography, and the history of childhood, Dr Oosterwijk is a lecturer and researcher. The society will meet at 5.30pm, Friday 7 August at Peninsula Community Theatre, Wilson Rd, Mornington. Bookings: 9787 2092.

Man surrenders A MT MARTHA man last week handed himself in to police over an armed raid on Morningtonâ&amp;#x20AC;&amp;#x2122;s Thirsty Camel liquor outlet. The man, 38, was charged with armed robbery, theft and theft with an offensive weapon, a hammer, over the Friday 10 July incident. He has been bailed to appear at Melbourne Magistratesâ&amp;#x20AC;&amp;#x2122; Court for a committal hearing in October.

Fires are out Flip side: Emergency crews freed a driver from this car which ended on its side in Ocean Beach Rd, Sorrento. Picture: David Lammers

then helped police find his parachute and helmet.â&amp;#x20AC;? Rosebud Sergeant Tony Paterson said the man was lucky not to have sustained injuries more serious than a

leg fracture. â&amp;#x20AC;&amp;#x153;He was able to drag himself up to where the fire trail mountain bike riders found him, which was very fortunate.â&amp;#x20AC;? Paramedics assisted the man before

he was airlifted to The Alfred hospital with serious but not life threatening injuries. SES officers found his parachute at the base of the quarry.

UNAUTHORISED burn-offs have prompted â&amp;#x20AC;&amp;#x153;a couple of complaints this weekâ&amp;#x20AC;? to Mornington Fire Brigade. Duty officer John Donovan said burn-offs were not permitted on the peninsula on blocks of less than 1500 square metres. They are allowed on larger blocks 9am-4pm Fridays and Saturdays. Details: mornpen.vic.gov.au