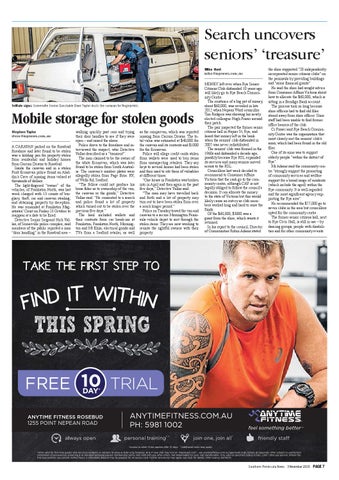 Mobile storage for stolen goods Stephen Taylor steve@mpnews.com.au A CARAVAN parked on the Rosebud foreshore and later found to be stolen was a holding pen for property stolen from residential and holiday homes from Carrum Downs to Rosebud. Inside the caravan and in a stolen Ford Econovan police found an Aladdin’s Cave of missing items valued at thousands of dollars. The light-fingered “owner” of the vehicles, of Frankston North, was last week charged with 13 counts of burglary, theft, car and caravan stealing, and obtaining property by deception. He was remanded at Frankston Magistrates’ Court on Friday 23 October to reappear at a date to be fixed. Detective Senior Sergeant Nick Vallas, of Somerville police complex, said members of the public reported a man “door handling” in the Rosebud area –

walking quickly past cars and trying their door handles to see if they were open – and raised the alarm. Police drove to the foreshore and interviewed the suspect, who Detective Vallas described as a “transient”. The man claimed to be the owner of the white Econovan, which was later found to be stolen from South Australia. The caravan’s number plates were allegedly stolen from Page Bros. RV, of Wells Rd, Seaford. “The fellow could not produce his bona fides as to ownership of the van, the caravan or the goods,” Detective Vallas said. “He consented to a search and police found a lot of property which turned out to be stolen over the previous five days.” The haul included wallets and their contents from car break-ins at Frankston, Frankston North, Mornington and Mt Eliza, electrical goods and TVs from a Seaford retailer, as well

as the campervan, which was reported missing from Carrum Downs. The total value was estimated at $40,000 for the caravan and its contents and $1000 for the Econovan. Police will allege credit cards stolen from wallets were used to buy items from unsuspecting retailers. They say keys to several homes had been stolen and then used to rob them of valuables at different times. “One house in Frankston was broken into in April and then again in the past five days,” Detective Vallas said. “The man may have travelled back and forth and a lot of property may turn out to have been stolen from over a much longer period.” Police on Tuesday towed the van and caravan to a secure Mornington Peninsula vehicle depot to sort through the stolen items. They are now working to reunite the rightful owners with their property.

MONEY left over when Rye Senior Citizens Club disbanded 10 years ago will likely go to Rye Beach Community Centre. The existence of a big pot of money, about $60,000, was revealed in late 2012 when Nepean Ward councillor Tim Rodgers was showing his newly elected colleague Hugh Fraser around their patch. The pair inspected the former senior citizens hall in Napier St, Rye, and heard that money left in the bank when the seniors' club disbanded in 2005 was never redistributed. The seniors' club was formed in the 1960s and disbanded a decade ago, possibly because Rye RSL expanded its services and many seniors moved across to the RSL. Councillors last week decided to recommend to Consumer Affairs Victoria that the cash go to the community centre, although CAV is not legally obliged to follow the council's decision. It can allocate the money to the state of Victoria but this would likely cause an outcry as club members worked long and hard to raise the funds. Of the $60,000, $3000 was a grant from the shire, which wants it returned. In his report to the council, Director of Communities Robin Adams stated

the shire supported "20 independently incorporated senior citizens clubs" on the peninsula by providing buildings and "some financial grants". He said the shire had sought advice from Consumer Affairs Victoria about how to allocate the $60,000, which is sitting in a Bendigo Bank account. The process took so long because shire officers had to find old files stored away from shire offices. Shire staff had been unable to find former office bearers of the club. Cr Fraser said Rye Beach Community Centre was the organisation that most closely met the seniors' club's aims, which had been found in the old files. One of its aims was to support elderly people "within the district of Rye". Mr Adams said the community centre "strongly support the promoting of community services and welfare support for a broad range of residents (which include the aged) within the Rye community. It is well-regarded and the most significant agency supporting the Rye area". He recommended the $57,000 go to seven clubs in the area but councillors opted for the community centre. The former senior citizens hall, next to Rye Civic Hall, is still in use – by dancing groups, people with disabilities and for other community events.

TAKE THE FIRST STEP TO

IT WITHIN D FIN

ANYTIMEFITNESS.COM.AU PH: 5981 1002 ^Access to other Clubs applies after 31 days. ^^Additional costs may apply.