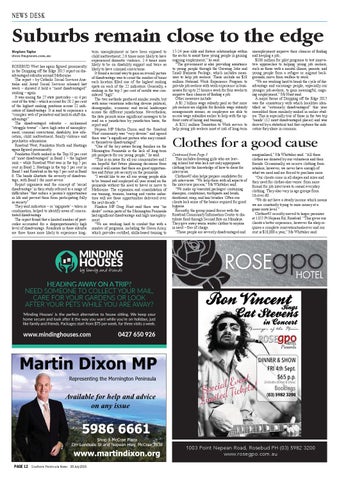 term unemployment or have been exposed to child maltreatment; 2.6 times more likely to have experienced domestic violence; 2.4 times more likely to be on disability support and twice as likely to have criminal convictions. It found a second way to gain an overall picture of disadvantage was to count the number of times each location filled one of the highest ranking spots on each of the 22 indicators. Generally, a ranking in the top 5 per cent of results was considered â&#x20AC;&#x153;highâ&#x20AC;?. The two methods produced similar results, but with some variations reflecting diverse political, demographic, economic and social landscapes across the different jurisdictions. Nevertheless, the data permits some significant messages to be read on a jurisdiction by jurisdiction basis, the report said. Nepean MP Martin Dixon said the Rosebud West community was â&#x20AC;&#x153;very diverseâ&#x20AC;? and agreed there was â&#x20AC;&#x153;a significant portion who may consider themselves disadvantagedâ&#x20AC;?. â&#x20AC;&#x153;One of the key issues facing families on the Mornington Peninsula is the lack of long-term job prospects for our young people,â&#x20AC;? he said. â&#x20AC;&#x153;This is an issue for all our communities and I am hopeful that future planning decisions from council will ensure that there are great opportunities and future job security on the peninsula. â&#x20AC;&#x153;I would like to see all our young people able to be trained and employed all year round on the peninsula without the need to travel or move to Melbourne. The expansion and consolidation of our training, tourism, boating and visitor industries will see these opportunities delivered over the next decade.â&#x20AC;? Flinders MP Greg Hunt said there was â&#x20AC;&#x153;no doubtâ&#x20AC;? certain parts of the Mornington Peninsula had significant disadvantage and high unemployment. â&#x20AC;&#x153;We are working hard to combat this with a number of programs, including the Green Army, which provides certified, skills-based training to

17-24 year olds and fosters relationships within the sector to assist these young people in gaining ongoing employment,â&#x20AC;? he said. â&#x20AC;&#x153;The government is also providing assistance to young people through the Growing Jobs and Small Business Package, which includes measures to help job seekers. These include an $18 million National Work Experience Program to provide job seekers with work experience in businesses for up to 25 hours a week for four weeks to improve their chances of finding a job. Other measures include: A $1.2 billion wage subsidy pool so that more job seekers are eligible for flexible wage subsidy arrangements sooner, so employers are able to access wage subsidies earlier to help with the upfront costs of hiring and training; A $212 million Transition to Work service to help young job seekers most at risk of long-term

unemployment improve their chances of finding and keeping a job; $106 million for pilot programs to test innovative approaches to helping young job seekers, such as those with a mental illness, parents, and young people from a refugee or migrant backgrounds, move from welfare to work. â&#x20AC;&#x153;We are working hard to break the cycle of disadvantage and encourage people, especially our younger job-seekers, to gain meaningful, ongoing employment,â&#x20AC;? Mr Hunt said. A major theme of Dropping off the Edge 2015 was the consistency with which localities identified as â&#x20AC;&#x153;extremely disadvantagedâ&#x20AC;? this year resembled those similarly ranked in earlier studies. This is especially true of those in the two top â&#x20AC;&#x2DC;bandsâ&#x20AC;&#x2122; (12 most disadvantaged places) and was derived by a statistical tool that captures the indicators they share in common.

Clothes for a good cause Continued from Page 3 This includes dressing girls who are leaving school but who lack not only appropriate clothing but the knowledge of how to dress for interviews. Clothes4U also helps prepare candidates for job interviews. â&#x20AC;&#x153;We help them with all aspects of the interview process,â&#x20AC;? Ms Whittaker said. â&#x20AC;&#x153;We make up 'essential packages' containing shampoo, conditioner, toothpaste and brush, deodorant, soap, and hair brushes. Often our clients lack some of the basics required for good hygiene. Recently, the group joined forces with the Rosebud Community Information Centre to distribute food through Second Bite on Mondays. They give away warm winter clothes to anyone in need â&#x20AC;&#x201C; free of charge. â&#x20AC;&#x153;These people are severely disadvantaged and

marginalised,â&#x20AC;? Ms Whittaker said. â&#x20AC;&#x153;All these clothes are donated by our volunteers and their friends. Occasionally, we receive clothing from retailers, however, we never have enough of what we need and are forced to purchase more. â&#x20AC;&#x153;Our clients come in all shapes and sizes and their need for clothes also varies: from more formal for job interviews to casual everyday clothing. They also vary in age groups from 16-over 60. â&#x20AC;&#x153;We do not have a steady income which means we are constantly trying to raise money at a grass roots level.â&#x20AC;? Clothes4U recently moved to larger premises at 1355 Pt Nepean Rd, Rosebud. â&#x20AC;&#x153;This gives our clients a better experience, however the shop requires a complete renovation/makeover and our rent is $18,000 a year,â&#x20AC;? Ms Whittaker said.