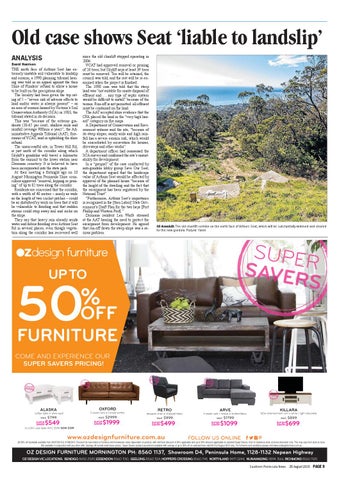 Old case shows Seat â&#x20AC;&#x2DC;liable to landslipâ&#x20AC;&#x2122; ANALYSIS David Harrison THE north face of Arthurs Seat has extremely unstable soil vulnerable to landslip and erosion, a 1990 planning tribunal hearing was told in an appeal against the then Shire of Flindersâ&#x20AC;&#x2122; refusal to allow a house to be built on the precipitous slope. The locality had been given the top rating of 5 â&#x20AC;&#x201C; â&#x20AC;&#x153;severe risk of adverse effects to land and/or water is always presentâ&#x20AC;? â&#x20AC;&#x201C; as an area of erosion hazard by Victoriaâ&#x20AC;&#x2122;s Soil Conservation Authority (SCA) in 1983, the tribunal stated in its decision. This was â&#x20AC;&#x153;because of the extreme gradients (20-65 per cent), shallow soils and rainfall (average 900mm a year)â&#x20AC;?, the Administrative Appeals Tribunal (AAT), forerunner of VCAT, said in upholding the shire refusal. The unsuccessful site, in Tower Hill Rd, is just north of the corridor along which Skyliftâ&#x20AC;&#x2122;s gondolas will travel a kilometre from the summit to the lower station near Dromana cemetery. It is believed to have been incorporated into the state park. At their meeting a fortnight ago on 10 August Mornington Peninsula Shire councillors approved â&#x20AC;&#x153;removal, lopping or pruningâ&#x20AC;? of up to 82 trees along the corridor. Residents are concerned that the corridor, with a width of 40 metres â&#x20AC;&#x201C; nearly as wide as the length of two cricket pitches â&#x20AC;&#x201C; could be so disturbed by work on trees that it will be vulnerable to flooding and that sudden storms could strip away soil and rocks on the slope. They say that heavy rain already sends water and debris flooding over Arthurs Seat Rd in several places, even though vegetation along the corridor has recovered well

since the old chairlift stopped operating in 2006. VCAT had approved removal or pruning of 26 trees, but Skylift says at least 39 trees must be removed. Ten will be retained, the council was told, and the rest will be re-examined when the project is finished. The 1990 case was told that the steep land was â&#x20AC;&#x153;not suitable for onsite disposal of effluent and â&#x20AC;Ś any type of septic system would be difficult to installâ&#x20AC;? because of the terrain. Run-off is not permitted: all effluent must be contained on the land. The AAT accepted shire evidence that the CFA placed the land in the â&#x20AC;&#x153;very high hazardâ&#x20AC;? category on fire maps. A Department of Conservation and Environment witness said the site, â&#x20AC;&#x153;because of its steep slopes, sandy soils and high rainfall has a severe erosion risk, which would be exacerbated by excavation for houses, driveways and other worksâ&#x20AC;?. A department officer had reassessed the SCA survey and confirmed the siteâ&#x20AC;&#x2122;s unsuitability for development. In a â&#x20AC;&#x153;prequelâ&#x20AC;? of the case conducted by anti-gondola lobby group Save Our Seat, the department argued that the landscape value of Arthurs Seat would be affected by approval of the planned house â&#x20AC;&#x153;because of the height of the dwelling and the fact that the escarpment has been registered by the National Trustâ&#x20AC;?. â&#x20AC;&#x153;Furthermore, Arthurs Seatâ&#x20AC;&#x2122;s importance is recognised in the [then Labor] State Governmentâ&#x20AC;&#x2122;s Draft Plan for the two bays [Port Phillip and Western Port].â&#x20AC;? Dromana resident Len Warfe stressed at the AAT hearing the need to protect the escarpment from development. He agreed that run-off down the steep slope was a serious problem.

All downhill: The old chairlift corridor on the north face of Arthurs Seat, which will be substantially widened and cleared for the new gondola. Picture: Yanni