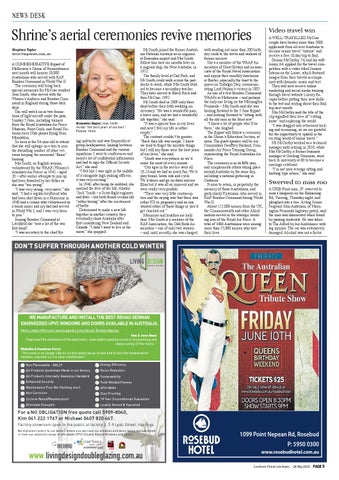 Shrine’s aerial ceremonies revive memories Stephen Taylor steve@mpnews.com.au A COMMEMORATIVE flypast of Melbourne’s Shrine of Remembrance next month will honour 10,000 Australians who served with RAF Bomber Command in World War II. The ceremony will bring back special memories for McCrae resident Jean Smith, who served with the Women’s Airforce and Bomber Command in England during those dark days. She will watch on as two formations of light aircraft make the pass, Sunday 5 June, including trainers from the Royal Australian Air Force Museum, Point Cook, and Royal Victorian Aero Club planes flying from Moorabbin. So keen is the 94-year-old to attend that she will splurge on a taxi to join the dwindling number of other veterans keeping the memorial “flame” burning. Mrs Smith, an English woman, volunteered for the WAAF (Women’s Auxiliary Air Force) in 1942 – aged 20 – after earlier attempts to join up had been thwarted by her father as she was “too young”. “I was very young; very naïve,” she said. “I had a regular boyfriend who had been shot down in a Hurricane in 1940 and a cousin who volunteered as a bomb aimer and my dad had served in World War I, and I was very keen to join.” Joining Bomber Command at Litchfield she “saw a lot of the war first hand”. “I was secretary to the chief fly-

ing instructor and was frequently at group headquarters, liaising between Bomber Command and the various squadrons. I went to conferences and heard a lot of confidential information and had to sign the Official Secrets Act,” she said. “I felt like I was right in the middle of it alongside high ranking officers; it was very exciting.” In 1946, after being de-mobbed, she married the love of her life, Alistair ‘Jock’ Smith – a Scots flight engineer and fitter – but both found civilian life “rather boring” after the excitement of battle. Determined to make a new life together in another country, they eventually chose Australia after first considering New Zealand and Canada. “I didn’t want to live in the snow,” she quipped.

Mr Smith joined the former Australian National Airways as an engineer at Essendon airport and Mrs Smith follow him here six months later on a migrant ship, the New Australia, in 1952. The family lived at Oak Park, and Mr Smith could walk across the paddocks to work, while Mrs Smith studied to become a secondary teacher. They later moved to Black Rock and then McCrae, 1992. Mr Smith died in 2009 only three days before their 64th wedding anniversary. “He was a wonderful man, a brave man, and we had a wonderful life together,” she said. “It was a special time in our lives and now I feel my life is rather empty.” The contrast couldn’t be greater: “Back then life was simple. I know we tend to forget the horrible things but I still say those were the best years of our lives,” she said. “Death was everywhere so we’d make the most of every minute. “Our ages in the service were all 18-24 and we had so much fun. We’d play tennis, horse ride and cycle. We’d dance and go on dates and see films but it was all so innocent and we were really very prudish. “There was very little contraception and the saying was that there was either VD or pregnancy and no one wanted either of those things or you’d get chucked out.” Memories and loyalties are held dear. Mrs Smith is a member of the RAF Association, the Odd Bods Association – one of only two women – and, until recently, she was charged

with sending out more than 200 birthday cards to the wives and widows of former aircrew. She’s a member of the WAAF Association of Great Britain and an associate of the Royal Naval Association and enjoys their monthly luncheons at Baxter, especially the toast to the queen on Trafalgar Day, commemorating Lord Nelson’s victory in 1805. As one of a few Bomber Command WAAFs in Melbourne – and perhaps the only one living on the Mornington Peninsula – Mrs Smith said she was looking forward to the 5 June flypast – and looking forward to “sitting with all the old men in the front row”. “I know a lot of people who’ll be there,” she laughed. The flypast will follow a ceremony in the Shrine’s Education Section, at noon. The guest speaker will be Air Commodore Geoffrey Harland, Commander Air Force Training Group, representing the Royal Australian Air Force. The ceremony is in its fifth year, and complements others taking place around Australia on the same day, including a national gathering in Canberra. It aims to retain, in perpetuity, the memory of those Australians, and particularly Victorians, who served in RAF Bomber Command during World War II. About 125,000 airmen from the UK, the Commonwealth and other Allied nations served in the strategic bombing arm of the Royal Air Force. A total of 3486 Australians were among more than 55,000 airmen who lost their lives.

A WELL-TRAVELLED McCrae couple have beaten more than 5000 applicants from all over Australia to become senior travel “interns” and receive a free 10-day trip to Bali. Dennis McCarthy, 74, and his wife Jenny, 64, applied for the travel competition with a video titled Seniors Interns on the Loose, which featured images from their travels accompanied with dramatic music and text. They will now receive online marketing and social media training through travel website Luxury Escapes before putting their new skills to the test and writing about their Bali trip next month. Mrs McCarthy said the title of the clip signified their love of “cutting loose” and exploring the world. “I was dragged into retirement kicking and screaming, so we are grateful for the opportunity to upskill in the exciting world of online travel.” Mr McCarthy worked as a technical manager until retiring in 2010, while Mrs McCarthy, a former business manager at Geelong Grammar, went back to university at 60 to become a marriage celebrant. “I’m not your average sitting and knitting type retiree,” she said.

Swerved to miss roo A CRIB Point man, 29. swerved to miss a kangaroo on the Balnarring Rd, Tuerong, Thursday night, and ploughed into a tree. Acting Senior Sergeant John Anderson, of Mornington Peninsula highway patrol, said the man was disoriented when found by passing motorists. He was taken to The Alfred by Air Ambulance with leg injuries. The car was extensively damaged. Alcohol was not a factor.

For a NO OBLIGATION IUHHTXRWHFDOOé8040, Kim 041 222 1767 or Michael 0407 820 447. Factory showroom open to the public at factory 2, 7-9 Lyall Street, Hastings. We welcome visitors to our factory where you can view our windows and doors being manufactured or view our extensive range of affordable UPVC Double Glazed Windows and Doors.