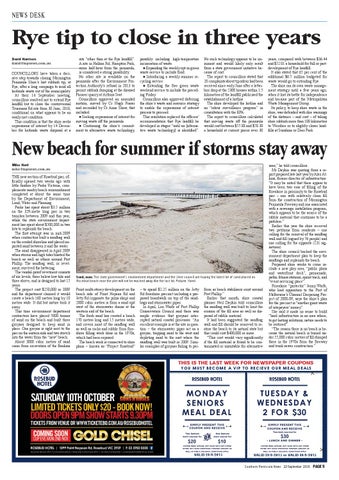 Rye tip to close in three years David Harrison david@mpnews.com.au COUNCILLORS have taken a decisive step towards closing Mornington Peninsula Shireâ&amp;#x20AC;&amp;#x2122;s last rubbish tip, at Rye, after a long campaign to send all kerbside waste out of the municipality. At their 14 September meeting, councillors resolved not to extend Rye landfill but to close the controversial Truemans Rd site from 30 June, 2018, conditional on what appears to be an easily met condition. This condition is that the shire seeks expressions of interest by 14 December for kerbside waste disposal at a

years, compared with between $36.44 and $52.01 a household for full or partdevelopment of Rye landfill. It also stated that 65 per cent of the additional $6.5 million budgeted for waste would go to extending Rye. The shire ran its own waste management strategy until a few years ago, when it lost its battle for independence and became part of the Metropolitan Waste Management Group. Its policy, to keep shire waste in the shire, was defended with dire warnings of the distance â&amp;#x20AC;&amp;#x201C; and cost â&amp;#x20AC;&amp;#x201C; of taking shire rubbish more than 100 kilometres to Werribee or to slightly closer landfills at Sunshine or Deer Park.

No such technology appears to be imminent and would likely only result from a state government initiative because of cost. The report to councillors stated that 28 complaints about tip odour had been received since early June after a letterbox drop at the 2300 houses within 1.5 kilometres of the landfill publicised the establishment of a hotline. The shire developed the hotline and an â&amp;#x20AC;&amp;#x153;odour surveillance programâ&amp;#x20AC;? in consultation with the EPA. The report to councillors calculated that moving waste off the peninsula would cost between $55.88 and $58.38 a household at current prices over 30

Sand, man: The state governmentâ&amp;#x20AC;&amp;#x2122;s environment department and the shire council are hoping the latest lot of sand placed on Rosebud beach near the pier will not be washed away like the last lot. Picture: Yanni

â&amp;#x20AC;&amp;#x201C; to spend $2.25 million on the Jetty Rd foreshore precinct including a proposed boardwalk on top of the sandbags and stormwater pipes. In April, Len Warfe of Port Phillip Conservation Council said there was ample evidence that groynes interrupted natural coastal processes. â&amp;#x20AC;&amp;#x153;An excellent example is at the site in question â&amp;#x20AC;&amp;#x201C; the stormwater pipes act as a groyne, trapping sand to the west and depleting sand to the east where the sandbag wall was built in 2009. Similar examples of groynes failing to per-

form as beach stabilisers exist around Port Phillip.â&amp;#x20AC;? Earlier that month, shire coastal planner Neil Daykin told councillors the sandbag wall was built to limit the erosion of the fill area as well as dispersal of rubble material. It had been suggested the sandbag wall and fill should be removed to restore the beach to its natural state but this could cost $400,000 or more. â&amp;#x20AC;&amp;#x153;This cost would vary significantly if the fill material is found to be contaminated or unsuitable for alternative

Point multi-storey development on the beach side of Point Nepean Rd and Jetty Rd (opposite the pizza shop) and 2000 cubic metres is from a sand spit west of the stormwater drains at the western end of the beach. The fresh sand has created a beach 170 metres long and 15 metres wide, and covers most of the sandbag wall as well as rocks and rubble from foreshore filling work done in the 1970s, which had been exposed. The beach work is connected to shire plans â&amp;#x20AC;&amp;#x201C; known as â&amp;#x20AC;&amp;#x153;Project Rosebudâ&amp;#x20AC;?

THE new section of Rosebud pier, officially opened two weeks ago with little fanfare by Parks Victoria, complements nearby beach renourishment completed at about the same time by the Department of Environment, Land, Water and Planning. Parks has spent about $3.5 million on the 329-metre long pier in two tranches between 2009 and this year, while the state environment department has spent about $500,000 in two lots to replenish the beach. The first attempt was in mid-2009 when contractors built a sandbag wall on the eroded shoreline and placed imported sand between it and the water. The sand disappeared in April 2009 when storms and high tides blasted the beach as well as others around Port Phillip. The sandbag wall, or revetment, survived the battering. The vandal-proof revetment consists of six levels, three below low tide and three above, and is designed to last 15 years. The project cost $250,000 in 2009 and the department claimed it would create a beach 160 metres long by 10 metres wide. It did but nature took it away. This time environment department contractors have placed 5000 tonnes of sand on the beach and built three groynes designed to keep sand in place. One groyne is right next to the pier on the eastern side and two stretch into the water from the â&amp;#x20AC;&amp;#x153;newâ&amp;#x20AC;? beach. About 3000 cubic metres of sand came from excavation of the Banksia