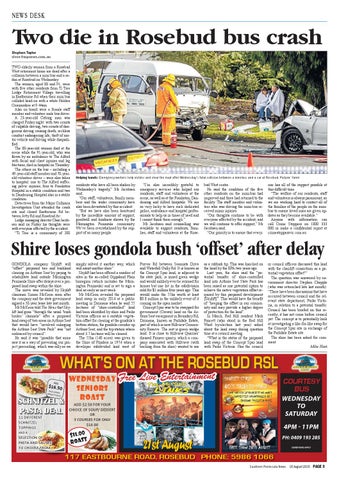 Two die in Rosebud bus crash Stephen Taylor steve@mpnews.com.au TWO elderly women from a Rosebud West retirement home are dead after a collision between a mini bus and a sedan at Rosebud on Wednesday. The women, aged 88 and 91, were with five other residents from Ti Tree Lodge Retirement Village travelling in Eastbourne Rd when their mini bus collided head-on with a white Holden Commodore at 9.44am. Also on board were a female staff member and volunteer male bus driver. A 23-year-old Coburg man was charged Friday night with two counts of culpable driving, two counts of dangerous driving causing death, reckless conduct endangering life, theft of motor vehicle and driving while disqualified. The 88-year-old woman died at the scene while the 91-year-old, who was flown by air ambulance to The Alfred with facial and chest injuries and leg fractures, died in hospital on Thursday. The others on the bus – including a 49-year-old staff member and 70-yearold volunteer driver – were also taken to hospital: one to The Alfred suffering pelvic injuries; four to Frankston Hospital in a stable condition and two to Dandenong Hospital also in a stable condition. Detectives from the Major Collision Investigation Unit attended the crash site and closed Eastbourne Rd between Jetty Rd and Rosebud Av. Lodge managing director Chas Jacobsen said on Friday his thoughts were with everyone affected by the accident. “Ti Tree is a community of 200

Helping hands: Emergency workers help victims and clear the road after Wednesday’s fatal collision between a mini-bus and a car at Rosebud. Picture: Yanni

residents who have all been shaken by Wednesday’s tragedy,” Mr Jacobsen said. “Our staff, volunteers, family members and the wider community have also been devastated by this accident. “But we have also been heartened by the incredible amount of support, goodwill and kindness shown by the Mornington Peninsula community. We’ve been overwhelmed by the support of so many people.

“I’m also incredibly grateful to emergency services who helped our residents, staff and volunteers at the scene, as well as at the Frankston, Dandenong and Alfred hospitals. We are so very lucky to have such dedicated police, ambulance and hospital professionals to help us in times of need and I cannot thank them enough.” Mr Jacobsen said counselling was available to support residents, families, staff and volunteers at the Rose-

bud West centre. He said the condition of the five other residents on the mini-bus had improved and three had returned to the facility. The staff member and volunteer who was driving the mini-bus received minor injuries. “Our thoughts continue to be with everyone affected by the accident, and we will continue to offer support,” Mr Jacobsen said. “Our priority is to ensure that every-

one has all of the support possible at this difficult time. “The welfare of our residents, staff and volunteers is always paramount, so we are working hard to contact all of the families of the people on the minibus to ensure loved ones are given updates as they become available.” Anyone with information can call Crime Stoppers on 1800 333 000 or make a confidential report at crimestoppersvic.com.au

Shire loses gondola bush ‘offset’ after delay GONDOLA company Skylift will “offset” proposed tree and bushland clearing on Arthurs Seat by paying to rehabilitate land outside Mornington Peninsula Shire after delays over a proposed land swap within the shire. The move was revealed by Skylift chairman Simon McKeon soon after the company and the state government signed a 50-year lease late last month. Mr McKeon told The News that Skylift had gone “through the usual ‘bush broker’ channels” after a proposed land swap of two areas on Arthurs Seat that would have “involved enlarging the Arthurs Seat State Park” was “not embraced by council”. He said it was “possible that some saw it as a way of preventing our project proceeding, which was silly as we

simply solved it another way, which will assist another shire”. Skylift has been offered a number of sites in the so-called Gippsland Plain bioregion (which includes the Mornington Peninsula) and is set to sign a deal as early as next week. Mr McKeon revealed the proposed land swap in early 2014 at a public meeting in Dromana when he said 55 hectares of “shire-controlled” land had been identified by shire and Parks Victoria officers as a suitable vegetation offset for clearing at the gondola’s bottom station, the gondola corridor up Arthurs Seat, and the top station where about 3.7 hectares will be cleared. The 55ha (140 acres) was given to the Shire of Flinders in 1974 when a developer subdivided land west of

Purves Rd between Seamists Drive and Waterfall Gully Rd. It is known as the Concept Spur land, is adjacent to the state park, is zoned green wedge and would unlikely ever be rezoned for homes but one lot in the subdivision sold for $1 million four years ago. This would make the 55ha worth at least $8.8 million in the unlikely event of it coming on the open market. Concept Spur was to be swapped for government (Crown) land on the Arthurs Seat escarpment in Boundary Rd, Dromana, known as Parkdale Estate, part of which is now Hillview Community Reserve. The rest is green wedge land. It is close to Hillview Quarries’ disused Pioneer quarry, which a company associated with Hillview (with backing from the shire) wanted to use

as a rubbish tip. This was knocked on the head by the EPA two years ago. Last year, the shire said the “potential transfer of shire-controlled land into Arthurs Seat State Park has been raised as one potential option to achieve the native vegetation offset required by this proposed development [Skylift]”. This would have the benefit of “keeping the offset in our community and may provide a higher degree of protection for the land”. In March, Red Hill resident Mark Fancett (who stood in the Red Hill Ward by-election last year) asked about the land swap during question time at a council meeting. “What is the status of the proposed land swap of the Concept Spur land with Parks Victoria. Has the council

or council officers discussed this land with the chairlift consortium as a potential vegetation offset?” The question was answered by environment director Stephen Chapple (who was retrenched late last month): “There have been discussions that have occurred between council and the relevant state department, Parks Victoria, in relation to a potential transfer. Council has been briefed on this recently; it has not come before council yet. The concept is to potentially look at investigating a like-for-like swap for the Concept Spur site in exchange of the Parkdale Estate site. The shire has been asked for comment. Mike Hast

WHAT’S ON AT THE ROSEBUD RSL

11 DIFFERENT SCHNITZEL TOPPINGS AND A

SELECTION OF PASTA AND SAUCES TO CHOOSE FROM