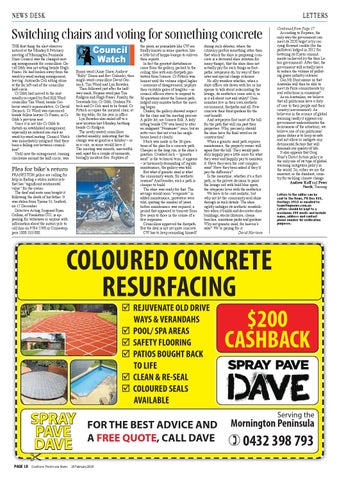 Switching chairs and voting for something concrete THE first thing the alert observer noticed at the Monday 8 February meeting of Mornington Peninsula Shire Council was the changed seating arrangements for councillors. David Gibb was not sitting beside Hugh Fraser. He had broken away from the ward-by-ward seating arrangement, leaving Antonella Celi sitting alone at the far left end of the councillor half-circle. Cr Gibb had moved to the seat usually occupied by Red Hill Ward councillor Tim Wood, beside Cerberus ward’s representative, Cr David Garnock. Cr Wood was ensconced beside fellow lawyer Cr Fraser, in Cr Gibb’s previous seat. Since it is not like Cr Gibb to disturb an established arrangement, especially an ordered one such as ward-by-ward seating. Council Watch was immediately intrigued. Had there been a falling-out between councillors? Until now the arrangement, running clockwise around the half-circle, was

Briars ward (Anne Shaw, Andrew “Billy” Dixon and Bev Colomb), then single-ward councillors David Garnock, Tim Wood and Lyn Bowden. Then followed just after the halfway mark, Nepean ward pair Tim Rodgers and Hugh Fraser. Finally, the Seawinds trio, Cr Gibb, Graham Pittock and Cr Celi used to be found. Cr Pittock occupies the mayoral chair, at the top table, for his year in office. Lyn Bowden also sailed off to a new location last Monday, berthing beside Cr Rodgers. The newly seated councillors chatted amiably, indicating that the change was as good as a holiday – or as a cure, as some would have it. The meeting was smooth, uneventful and, apart for a couple of moments, boringly incident-free. Reptiles of

Plea for bike’s return FRANKSTON police are calling for help in finding a stolen motorcycle that has “significant sentimental value” for the owner. The deaf and mute man bought it following the death of his father. It was stolen from Tyrone St, Seaford, on 15 December. Detective Acting Sergeant Ryan Collins, of Frankston CIU, is appealing for witnesses or anyone with information about the motorcycle to call him on 9784 5590 or Crimestoppers 1800 333 000.

the press, as journalists like CW are fondly known in some quarters, like a little bit of hoppo-bumpo to enliven their reports. In fact the greatest disturbances came from the gallery, packed to the ceiling tiles with anti-footpath protesters from Somers. Cr Pittock was lenient until the volume edged higher – murmurs of disagreement, zephyrs then veritable gales of laughter – as council officers strove to respond to 36 questions about the Somers path, lodged only minutes before the meeting began. Chided, the gallery showed respect for the chair and the meeting process. A polite lot, are Somers folk. A lady sitting beside CW was heard to utter an indignant “Nonsense!” once, but so sotto voce that not even her neighbours heard it clearly. Much was made in the 36 questions of the plan for a concrete path. Cheaper in the long run, is the shire’s position. Crushed rock – “granitic sand” is the technical term, it appears – is tiresomely demanding of regular maintenance, the gallery was told. But what if granitic sand is what the community wants, for aesthetic reasons? And besides, such a path is cheaper to build. The shire was ready for that. The savings would soon “evaporate” in added maintenance, protesters were told, quoting the number of years before maintenance was required, a period that appeared to truncate from five years to three in the course of a few responses. Councillors approved the footpath. But the deal is not yet quite concrete. CW has to keep reminding himself

during such debates, where the citizenry prefers something other than that which the shire is proposing (concrete is a favoured shire solution for many things), that the shire does not actually pay for such things as footpaths: ratepayers do, by way of their rates and special charge schemes. He idly wonders whether, when a shire officer sits down with her or his spouse to talk about redecorating the lounge, do aesthetics come into it, or is it all about cost and utility? Communities live in their own aesthetic environment, footpaths and all. Few concrete their front gardens for the cost benefit. And ratepayers foot most of the bill for the path that will run past their properties. Why, precisely, should the shire have the final word on its construction? When a granitic sand path requires maintenance, the property owner will again foot the bill. They would probably happily pay a little more for what they want and happily pay to maintain it. Have they seen the cost comparisons? Have they been asked if they’d pay the difference? In the meantime, whether it’s a footpath, or the private decision to paint the lounge red with bold blue spots, the ratepayer lives with the aesthetics. We have to be cost-realistic, but why not let the community soul shine through in such details. The shire rightly indulges its aesthetic sensibilities when it builds and decorates shire buildings, stocks libraries, cleans beaches, maintains parks and gardens. Why not granitic sand, for heaven’s sake? We’re paying for it. David Harrison

Continued from Page 17 According to Reputex, the only way the government can meet its 2020 target is by carrying forward credits (for the polluters) lodged in 2012 for bettering its Kyoto commitments (achieved by the then Labor government). After that, the government will actually have to reduce the volume of polluting gases industry releases. Can Mr Hunt assure us that Australia will then be able to meet its Paris commitments by real reductions in emissions? As an Australian, we believe that all politicians have a duty of care to their people and their country (environment). As believers in the science of global warming (sadly it appears our government underestimates the seriousness of the situation), we believe one of our politicians’ prime duties is to keep us safe and not allow or instigate any detrimental factors that will diminish our quality of life. It also appears that Greg Hunt’s Direct Action policy is the only one of its type of global warming mitigation policy in the world. So, either we are the smartest, or the dumbest, country for tackling climate change. Andrew Raff and Peter North, Tuerong Letters to the editor can be sent to The News, PO Box 588, Hastings 3915 or emailed to: team@mpnews.com.au Letters should be kept to a maximum 300 words and include name, address and contact phone number for verification purposes.