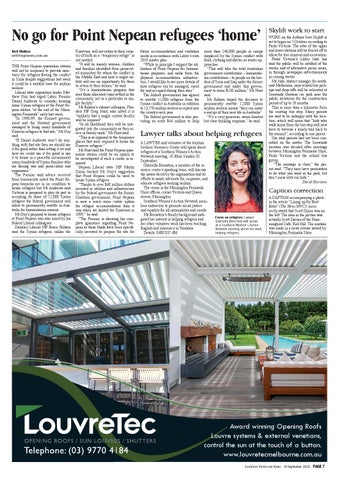 No go for Point Nepean refugees ‘home’ Neil Walker neil@mpnews.com.au THE Point Nepean quarantine station will not be reopened to provide sanctuary for refugees fleeing the conflict in Syria despite suggestions last week it could be a suitable base for asylum seekers. Liberal state opposition leader Matthew Guy had urged Labor Premier Daniel Andrews to consider housing some Syrian refugees at the Point Nepean station “at the end of the Mornington Peninsula” early last week. “In 1998-99, the Kennett government and the Howard government managed to bring many hundreds of Kosovar refugees to that site,” Mr Guy said. “If Daniel Andrews won’t do anything with that site then we should use it for good rather than letting it rot and how we could use it for good is use it to house in a peaceful environment many hundreds of Syrian families who are fleeing war and persecution and oppression.” The Premier said advice received from bureaucrats noted the Point Nepean barracks are in no condition to house refugees but Mr Andrews said Victoria is prepared to play its part in accepting its share of 12,000 Syrian refugees the federal government will allow to permanently resettle in Australia for humanitarian reasons. Mr Guy’s proposal to house refugees at Point Nepean was also nixed by his federal Liberal colleagues. Dunkley Liberal MP Bruce Billson said the Syrian refugees, unlike the

Kosovars, will not return to their country of birth so a “temporary refuge” is not needed. “It will be mainly women, children and families identified from persecuted minorities for whom the conflict in the Middle East and how it might unfold will see no opportunity for them to return to their homes,” he said. “It’s a humanitarian program that sees those allocated visas settled in the community, not in a particular or single facility.” Mr Billson’s cabinet colleague, Flinders MP Greg Hunt, also noted it is “unlikely that a single central facility will be required”. “In all likelihood they will be integrated into the community as they arrive in family units,” Mr Hunt said. “This is as opposed to the temporary places that were required to house the Kosovar refugees.” Mr Hunt said the Point Nepean quarantine station could be an option to be investigated if such a centre is required. Nepean Liberal state MP Martin Dixon backed Mr Guy’s suggestion that Point Nepean could be used to house Syrian refugees. “Thanks to over $40 million dollars invested in utilities and infrastructure by the federal government the former Coalition government, Point Nepean is now a much more viable option for refugee accommodation than it was when we hosted the Kosovars in 1999,” he said. “The Premier is showing his complete ignorance regarding Point Nepean as these funds have been specifically invested to prepare the site for

future accommodation and visitation needs in accordance with Labor’s own 2010 master plan. “While in principle I support the utilisation of Point Nepean for humanitarian purposes, and aside from the physical accommodation infrastructure, I would like to see more details of how refugees can be managed, cared for and occupied during their stay.” The Abbott government has agreed to resettle 12,000 refugees from the Syrian conflict in Australia in addition to 13,750 asylum seekers accepted into the country each year. The federal government is also providing an extra $44 million to help

more than 240,000 people in camps displaced by the Syrian conflict with food, clothing and shelter as winter approaches. “This will take the total Australian government contribution – humanitarian contribution – to people on the borders of Syria and Iraq under the former government and under this government to some $230 million,” Mr Hunt said. Mr Billson hoped the decision to permanently resettle 12,000 Syrian asylum seekers means “they can make a real go of their new life in Australia”. “It’s a very generous, warm-hearted but clear thinking response,” he said.

Lawyer talks about helping refugees A LAWYER and volunteer at the Asylum Seekers’ Resource Centre will speak about refugees at a Southern Women’s Action Network meeting, 10.30am Sunday 20 September. Gabriella Bornstein, a member of the resource centre’s speaking team, will discuss the issues faced by the organisation and its efforts to assist, advocate for, empower, and educate refugees seeking asylum. The venue is the Mornington Peninsula Shire offices, corner Victoria and Queen streets, Mornington. Southern Women’s Action Network members endeavour to promote social justice and equality for all nationalities and creeds. Ms Bornstein’s family background instigated her interest in helping refugees and her other volunteer work has been teaching English and numeracy in Tanzania. Details: 0400 835 486.

Skylift work to start WORK on the Arthurs Seat Skylift is set to begin on 5 October, according to Parks Victoria. The sites of the upper and lower stations will be fenced off to allow for tree removal and excavation. Parks Victoria’s Libby Jude has said the public will be notified of the works, and of alternative picnic areas, in through newspaper advertisements in coming weeks. Ms Jude, district manager for southeast Melbourne, says school bus pickups and drop-offs will be relocated at Seawinds Gardens car park near the public lavatories for the construction period of up to 18 months. This is more than a kilometre from the existing bus stop. Many parents are said to be unhappy with the location, which will mean that “kids who walk home from the bus stop will now have to traverse a lonely trail back to the summit”, according to one parent. She said parents had not been consulted on the matter. The Seawinds location was decided after meetings between Mornington Peninsula Shire, Parks Victoria and the school bus group. “The message is clear,” the parent said. “They may have permission to do what you want in the park, but don’t mess with our kids.” David Harrison

Focus on refugees: Lawyer Gabriella Bornstein will speak at a Southern Women’s Action Network meeting about her work helping refugees.

A CAPTION accompanying a photo in the article “Lining up for Best Bites” (The News 8/9/15) incorrectly stated that Scott Dixon was on the left. The man in the picture was actually Scott Davies of the Hummingbird Café, Red Hill. The mistake was made in a news release issued by Mornington Peninsula Shire.