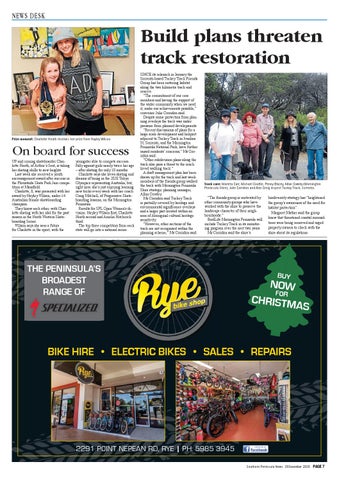 On board for success UP and coming skateboarder Charlotte Heath, of Arthurâ&#x20AC;&#x2122;s Seat, is taking her skating skills to new heights. Last week she received a youth encouragement award after success in the Phruntside Skate Park Jam competition at Mansfield. Charlotte, 8, was presented with her award by Hayley Wilson, under-14 Australian female skateboarding champion. They know each other, with Charlotte skating with her idol for the past season in the North Western Skateboarding Series. Wilson says she sees a future for Charlotte in the sport, with the

youngster able to compete successfully against girls nearly twice her age â&#x20AC;&#x201C; after skating for only 10 months. Charlotte says she loves skating and dreams of being in the 2020 Tokyo Olympics representing Australia, but, right now, sheâ&#x20AC;&#x2122;s just enjoying learning new tricks every week with her coach Craig Mitchell, of Progressive Skateboarding lessons, on the Mornington Peninsula. Results for SPL Open Women's division: Hayley Wilson first, Charlotte Heath second and Amelia Hitchcock third. The top three competitors from each state will go into a national series.

SINCE its relaunch in January the Sorrento-based Tuckey Track Friends Group has been restoring habitat along the two kilometre track and reserve. â&#x20AC;&#x153;The commitment of our core members and having the support of the wider community when we need it, make our achievements possible,â&#x20AC;? convenor Julie Corridon said. Despite some protection from planning overlays the track was under pressure from planned developments. â&#x20AC;&#x153;Recent discussions of plans for a large scale development and heliport adjacent to Tuckey Track in Ivanhoe St, Sorrento, and the Mornington Peninsula National Park, have further raised residentsâ&#x20AC;&#x2122; concerns,â&#x20AC;? Ms Corridon said. â&#x20AC;&#x153;Other subdivision plans along the track also pose a threat to the much loved walking track.â&#x20AC;? A draft management plan has been drawn up for the track and last week members of the friends group walked the track with Mornington Peninsula Shire strategic planning manager, Allan Cowley. Ms Corridon said Tuckey Track is partially covered by heritage and environmental significance overlays and a larger part located within an area of Aboriginal cultural heritage sensitivity. â&#x20AC;&#x153;However, other sections of the track are not recognised within the planning scheme,â&#x20AC;? Ms Corridon said.

â&#x20AC;&#x153;The friends group is motivated by other community groups who have worked with the shire to preserve the landscape character of their neighbourhoods.â&#x20AC;? BirdLife Mornington Peninsula will include Tuckey Track in its monitoring program over the next two years. Ms Corridon said the shireâ&#x20AC;&#x2122;s

biodiversity strategy has â&#x20AC;&#x153;heightened the groupâ&#x20AC;&#x2122;s awareness of the need for habitat protectionâ&#x20AC;?. Margaret Mather said the group knew that threatened coastal moonah trees were being removed and urged property owners to check with the shire about its regulations.

NOW FOR CHRISTM AS