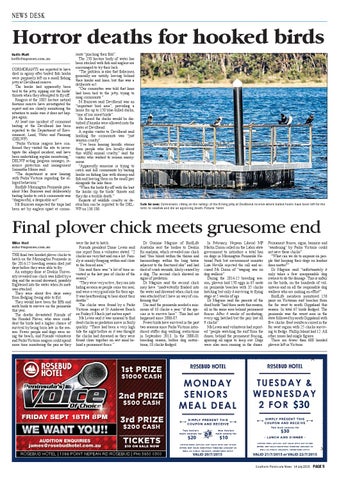 Horror deaths for hooked birds Keith Platt keith@mpnews.com.au CORMORANTS are reported to have died in agony after baited fish hooks were purposely left on a small fishing jetty at Devilbend reserve. The hooks had apparently been tied to the jetty, ripping out the birds’ throats when they attempted to fly off. Rangers at the 1005 hectare natural features reserve have investigated the report and are closely monitoring the situation to make sure it does not happen again. At least one incident of cormorant baiting at the Devilbend has been reported to the Department of Environment, Land, Water and Planning (DELWP). “Parks Victoria rangers have confirmed they visited the site to investigate the alleged incident, and have been undertaking regular monitoring,” DELWP acting program manager, resource protection and management Samantha Moore said. “The department is now liaising with Parks Victoria regarding the alleged behaviour.” Birdlife Mornington Peninsula president Max Burrows said deliberately baiting hooks to catch cormorants was “disgraceful, a despicable act”. Mr Burrows suspected the traps had been set by anglers upset at cormo-

rants “pinching their fish”. The 250 hectare body of water has been stocked with fish and anglers are encouraged to try their luck. “The problem is also that fishermen generally are untidy, leaving behind their hooks and lines, but this was a deliberate act. “Our committee was told that lines had been tied to the jetty, trying to snag cormorants.” M Burrows said Devilbend was an “important bird area”, providing a home for up to 150 blue-billed ducks, “one of our rarest birds”. He feared the ducks would be disturbed if kayaks were allowed onto the water at Devilbend. A regular visitor to Devilbend said hooking the cormorants was “just wanton cruelty”. “I’ve been hearing horrific stories from people who live locally about this wilful animal cruelty,” said the visitor who wished to remain anonymous. “Apparently someone is trying to catch and kill cormorants by baiting hooks on fishing line with shrimp and fish and leaving them on the small pier alongside the lake there. “When the birds fly off with the bait the hooks rip the birds’ throats and they die a terrible death.” Reports of wildlife cruelty or destruction can be reported to the DELWP on 136 186.

Safe for now: Cormoirants sitting on the railings of the fishing jetty at Devilbend reserve where baited hooks have been left for the birds to swallow and die an agonising death. Picture: Yanni

Final plover chick meets gruesome end Mike Hast mike@mpnews.com.au THE final two hooded plover chicks to hatch on the Mornington Peninsula in the 2014-15 breeding season died just days before they were able to fly. An autopsy done at Deakin University revealed one chick was killed by a dog and the second drowned, possibly frightened into the water when its mate was attacked. They were about five days away from fledging (being able to fly). They would have been the fifth and sixth birds to survive on the peninsula this year. The deaths devastated Friends of the Hooded Plover, who were confident the birds had a higher chance of survival by being born late in the season. Fewer people and dogs were using the beach, and Friends volunteers and Parks Victoria rangers could spend more time monitoring the pair as they

were the last to hatch. Friends president Diane Lewis said one report from a volunteer stated: “2 chicks are very fast and run a lot. Family is mainly foraging within and close to the fenced area.” She said there was “a lot of time invested in the last pair of chicks of the season”. “They were very active; they ran into hiding as soon as people came too near, and were a very good size for their age. It was heartbreaking to hear about their deaths.” The chicks were found by a Parks Victoria ranger at St Andrews Beach on Friday 6 March just metres apart. Ms Lewis said it was unusual to find dead chicks as predators move in fairly quickly. “There had been a very high tide the night before so it was thought the chicks had drowned as they were found close together on wet sand behind a permanent fence.”

Dr Grainne Maguire of BirdLife Australia sent the bodies to Deakin for analysis, which revealed one chick had “free blood within the thorax and haemorrhage within the lung tissue adjacent to the fractured ribs” and had died of crush wounds, likely caused by a dog. The second chick showed no signs of predation. Dr Maguire said the second chick may have “inadvertently flushed into the water and drowned when chick one was attacked but I have no way of confirming this”. She said the peninsula needed a minimum of 10 chicks a year “if the species is to survive here”. This had not happened since 2006-07. Fewer birds have survived in the past two seasons since Parks Victoria introduced stiffer dog walking restrictions in September 2013. In the 2000-01 breeding season, before dog restrictions, 18 chicks fledged.

In February, Nepean Liberal MP Martin Dixon called on the Labor state government to introduce a total ban on dogs in Mornington Peninsula National Park but environment minister Lisa Neville rejected the call and accused Mr Dixon of “waging war on dog walkers”. During the 2014-15 breeding season, plovers laid 150 eggs in 67 nests on peninsula beaches with 35 chicks hatching but only 4 surviving to flying stage at 5 weeks of age. Dr Maguire said the parents of the dead birds “had three nests this season, all in the same area behind permanent fences. After 4 weeks of incubating, every egg hatched but the pair lost all 9 chicks”. Ms Lewis said volunteers had reported “people watching the surf from the dunes, behind the permanent fencing, ignoring all signs to keep out. Dogs were also seen running in the dunes.

Permanent fences, signs, banners and ‘wardening’ by Parks Victoria could not save these chicks”. “What can we do to impress on people that keeping their dogs on leashes does matter?” Dr Maguire said “unfortunately it only takes a few irresponsible dog owners to do the damage. This is unfair on the birds, on the hundreds of volunteers and on all the responsible dog walkers who are making an effort”. BirdLife members monitored 156 pairs on Victorian surf beaches from the far west to south Gippsland this season. In total 67 birds fledged. The peninsula was the worst area in the state followed by south Gippsland with five chicks. Best results occurred in the far west region with 25 chicks surviving to fledge. Phillip Island had 12. All other zones had single figures. There are fewer than 600 hooded plovers left in Victoria.