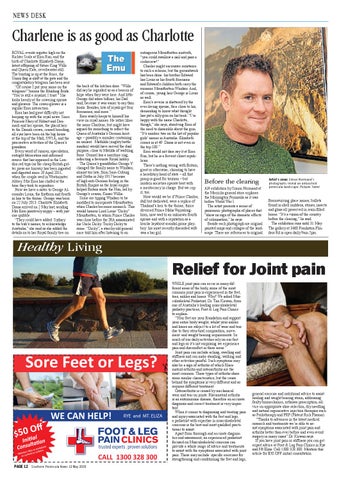 Charlene is as good as Charlotte ROYAL events register high on the Richter Scale at Emu Ruo, and the birth of Charlotte Elizabeth Diana, latest offspring of future King Wills and Queen Kate, reverberates still. The bunting is up at the fence, the Union flag is aloft at the gate and the congratulatory telegram has been sent. “Of course I put your name on the telegram!” booms the Blushing Bride. “You’re still a royalist, I trust.” She looks keenly at the cowering spouse and glowers. The cower-glower is a regular Emu interaction. Emu has had great difficulty not keeping up with the royal news. Since Princess Mary of Hobart and Denmark and her spouse, the placid heir to the Danish crown, ceased breeding, all eyes have been on the big house at the top of the Mall, SW1A, and the procreative activities of the Queen’s grandson. Every word of rumour, speculation, outright fabrication and informed source that has appeared in the London red tops (as the cheap British gutter press are known) has been ingested and digested since 29 April 2011, when the couple wed in Westminster Abbey. Mrs Emu has chafed at the time they took to reproduce. Now we have a sister to George Alexander Louis, the firstborn and fourth in line to the throne. George was born on 22 July 2013. Charlotte Elizabeth Diana arrived on 2 May last, sending Mrs Emu positively soppy – with just one quibble. “They could have added Sydney to the bub’s names, to acknowledge Australia,” she said as she added the details on to her Royal family tree on

the back of the kitchen door. “Wills did say he regarded us as a beacon of hope when they were here. And little George did adore bilbies, his Dad said, because it was easier to say than koala. Besides, lots of royals get four forenames, and more.” Emu wisely keeps to himself his view on royal names. He rather likes the name Charlene, but might have argued for something to reflect the Queen of Australia’s German heritage – possibly a moniker containing an umlaut. Mathilda (mighty battle maiden) would have served the dual purpose, close to Matilda of waltzing fame. Gunnel has a maritime ring, reflecting a favourite Royal hobby. The Queen’s grandfather George V changed the family name to Windsor, almost too late, from Saxe-Coburg and Gotha in July 1917 because of high anti-German feeling in the British Empire as the loyal empire helped Britain smite the Hun, led by George's cousin, Kaiser Willie. Some are tipping Windsor to be modified to incorporate Mountbatten when Charles becomes monarch. This would honour Lord Louis “Dicky” Mountbatten, to whom Prince Charles was close before the IRA assassinated his Uncle Dicky. Tricky Dicky to some. “Dicky”, a starchy old general once told him after listening to an

outrageous Mountbatten mistruth, “you could swallow a nail and pass a corkscrew!” Charles might encounter resistance to such a scheme, but the groundwork has been done: his brother Edward has Louis as his fourth forename and Edward's children both carry the surname Mountbatten-Windsor. And, of course, young heir George is Louis as well. Emu’s reverie is shattered by the ever-loving spouse, face close to his, demanding to know what thought has put a silly grin on his beak. “I’m happy with the name Charlotte, though,” she says, absolving Emu of the need to dissemble about the grin. “It’s number two on the list of popular girls’ names in Australia. Elizabeth comes in at 49. Diana is not even in the top 100.” Emu would not dare say it at Emu Ruo, but he is a fervent closet republican. There’s nothing wrong with Britain, great or otherwise, choosing to have a hereditary head of state – all that pomp is good for tourism – but modern societies operate best with a meritocracy in charge. But we cop it, too. How would we be if Prince Charles, dull but dedicated, were a replica of Thailand’s heir to the throne, thrice divorced Prince Maha Vajiralongkorn, now wed to an unknown fourth spouse and with a reputation as a louche layabout scandal-prone playboy: his most recently discarded wife was a bar girl.

Before the clearing AN exhibition by Simon Normand at the Merricks general store explores the Mornington Peninsula as it was before World War I. The artist presents a series of panoramic photographs of places that “show no sign of the dramatic effects of colonisation,” he says. Beside each photograph are original painted maps and collages of the landscape. There are references to original

Boonwurrung place names, bullets found in shell middens, stones, insects and glass all preserved in resin-filled boxes. “It’s a vision of the country before the clearing,” he said. The exhibition runs until 31 May. The gallery at 3460 Frankston-Flinders Rd is open daily 9am-5pm.

WHILE joint pain can occur in many different areas of the body, some of the most common joint pain is experienced in the feet, toes, ankles and knees. Why? We asked Musculoskeletal Podiatrist, Dr. Tim Kirwan, from one of Australia’s leading musculoskeletal podiatry practices, Foot & Leg Pain Clinics to explain. “Your feet are your foundation and support your entire body weight, whilst your ankles and knees are subject to a lot of wear and tear due to their structural composition, movement and weight bearing requirements. So much of our daily activities rely on our feet and legs so it’s not surprising we experience pain and discomfort in these areas.” Joint pain can include aching, swelling and stiffness and can make standing, walking and other activities painful. Such symptoms may also be a sign of arthritis of which Rheumatoid arthritis and osteoarthritis are the most common. These types of arthritis share some similar characteristics, but the cause behind the symptoms is very different and so requires different treatment. Osteoarthritis is caused by mechanical wear and tear on joints. Rheumatoid arthritis is an autoimmune disease, therefore an accurate diagnosis and correct treatment is very important. When it comes to diagnosing and treating pain and injury associated with the feet and legs, a podiatrist with expertise in musculoskeletal concerns is the best and most qualified practitioner to assist. Apart from thorough and accurate diagnostics and assessment, an experienced podiatrist focused on Musculoskeletal concerns can provide a whole range of advice and treatments to assist with the symptoms associated with joint pain. These may include: specific exercises for strengthening and conditioning the feet and legs,

general exercise and nutritional advice to assist healing and weight bearing strain, addressing faulty biomechanics, orthoses prescription, advice on appropriate shoe selection, dry needling and natural regenerative injection therapies such as Prolotherapy and PRP (Platent Rich Plasma). “Thanks to advances in the latest medical research and treatments we’re able to assist symptoms associated with joint pain and arthritis better than ever before and even avoid surgery in many cases” Dr. Kirwan says. If you have joint pain or stiffness you can get expert advice at Foot & Leg Pain Clinics in Rye and Mt Eliza. Call 1300 328 300. Mention this article for $50 OFF initial consultation.