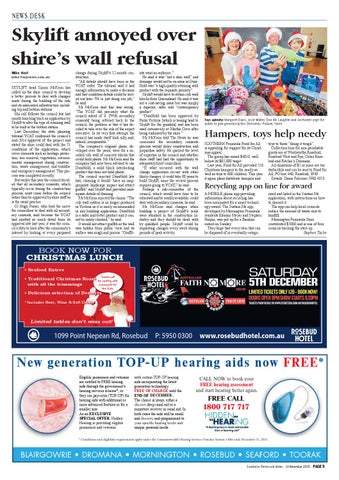 Skylift annoyed over shire’s wall refusal Mike Hast mike@mpnews.com.au SKYLIFT head Simon McKeon has called on the shire council to develop a better process to deal with changes made during the building of the ride and its associated infrastructure including top and bottom stations. His call follows the council late last month knocking back an application by Skylift to alter the type of retaining wall to be built at the bottom station. Last December, the state planning tribunal VCAT confirmed the council’s mid-2014 approval of the project and stated the shire could deal with the 71 conditions of the application, which cover elements such as heritage protection, tree removal, vegetation, environmental management during construction, waste management, and bushfire and emergency management. This process was completed recently. But earlier this year the council decided that all secondary consents, which typically occur during the construction process, must come before the council rather than be approved by shire staff as is the usual practice. Cr Hugh Fraser, who lead the move for councillors to deal with all secondary consents, said because the VCAT had omitted so much detail from its approval late last year, it was the council’s duty to look after the community’s interest by looking at every proposed

change during Skylift’s 12-month construction. “All details should have been in the VCAT order. The tribunal said it had enough information to make a decision and that condition details could be sorted out later. We’re just doing our job,” he said. Mr McKeon said this was wrong. “The VCAT did precisely what the council asked of it. [With secondary consents] being referred back to the council, the problem is that it has decided to take over the role of the expert executive. In its very first attempt, the council has made itself look silly and, indeed, irresponsible.” The company’s original plans, developed over the years, were for a socalled crib wall of concrete blocks that could hold plants. Mr McKeon said the company had now been advised to use DuraHold, a solid block interlocking product that does not hold plants. The council rejected DuraHold late last, claiming it would “have an inappropriate landscape impact and attract graffiti” and Skylift had provided inadequate details of draining. Mr McKeon rejected the claims. “The crib wall system is no longer produced in Victoria as it is rarely recommended in any building application. DuraHold is a safer and better product and it cannot be easily climbed,” he said. It would not attract graffiti as the wall was hidden from public view and its surface was rough and porous. “Graffit-

ists want an audience.” He said it was “not a dam wall” and drainage would not be an issue as DuraHold was “a high-quality retaining wall product with the requisite porosity”. Skylift would have to obtain crib wall blocks from Queensland. He said it was not a cost-saving issue but was simply a superior, safer and “contemporary product”. “DuraHold has been approved by Parks Victoria [which is leasing land to Skylift for the gondola] and has been used extensively at Martha Cove after being endorsed by the shire.” Mr McKeon told The News he was concerned the secondary consents process would delay construction and jeopardise safety. He queried the level of expertise in the council and whether shire staff had had the opportunity to adequately brief councillors. “If what occurred with the wall change application occurs with other likely changes, it could take 90 years to build Skylift, since the review process requires going to VCAT,” he said. Perhaps a sub-committee of the council, which would have time to be educated and be readily available, could deal with secondary consents, he said. Mr McKeon said changes when building a project of Skylift’s scale were standard in the construction industry and they should be dealt with by qualified people. Skylift could be requesting changes every week during periods of peak activity.

Hampers, toys help needy SOUTHERN Peninsula Food for All is appealing for support for its Christmas appeal. The group has raised $4810, well below its $65,000 target. Last year, Food for All provided 516 Christmas hampers to the needy as well as toys to 600 children. This year it again plans distribute hampers and

toys to those “doing it tough”. Collection bins for non-perishable goods are at Woolworths Rosebud, Rosebud West and Rye, Coles Rosebud and Ritchie’s Dromana. All donations of $2 or more are tax deductible and can be sent to Food for All, PO box 440, Rosebud, 3939. Details: Diane Falconer 5988 4353.

Recycling app on line for award A MOBILE phone app providing information about recycling has been nominated for a smart technology award. The Sustain Me app, developed by Mornington Peninsula residents Eleanor Meyer and Stephen Halpin, was put up for a Banksia award on Sunday. They hope that every item that can be disposed of is eventually catego-

rised and listed in the Sustain Me application, with instructions on how to discard it. The app can help local councils reduce the amount of waste sent to landfill. Mornington Peninsula Shire contributed $5000 and is one of four councils backing the start-up. Stephen Taylor

be visiting with a present for