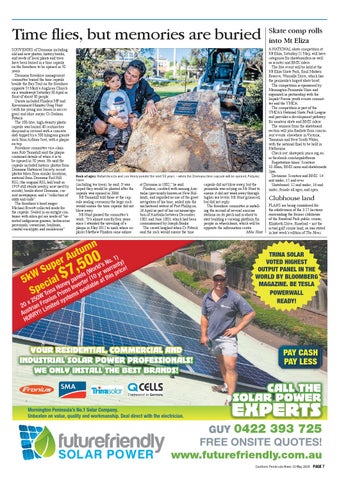 Time flies, but memories are buried

SOUVENIRS of Dromana including old and new photos, history books, and seeds of local plants and trees have been buried in a time capsule on the foreshore to be opened in 50 years. Dromana foreshore management committee buried the time capsule beside the Bay Trail on the foreshore opposite St Mark’s Anglican Church on a windswept Saturday 30 April in front of about 30 people. Guests included Flinders MP and Environment Minister Greg Hunt (with his young son James in soccer gear) and shire mayor Cr Graham Pittock. The 100-litre, high-density plastic capsule was buried 40 centimetres deep and is covered with a concrete slab topped by a 500 kilogram granite rock from Arthurs Seat, with a plaque on top. Foreshore committee vice-chairman Rob Tannahill said the plaque contained details of when it is to be opened in 50 years. He said the capsule included historic photos from Dromana Historical Society, recent photos taken from similar locations, material from Dromana Red Hill RSL (the original RSL hall built in 1919 still stands nearby, now used by scouts), books about Dromana, current newspapers, and a “collection of odds and ends”. The foreshore’s head ranger Michael Everitt collected seeds for the capsule. Sealed in an airtight container with silica gel are seeds of “assorted indigenous grasses, herbaceous perennials, casuarinas, banksias, coastal eucalypts, and melaleucas”

A NATIONAL skate competition at Mt Eliza, Saturday 21 May, will have categories for skateboarders as well as scooter and BMX riders. The free event will be held at the Mt Eliza Skate Park, Emil Madsen Reserve, Wooralla Drive, which has the peninsula's largest skate bowl. The competition is sponsored by Mornington Peninsula Shire and organised in partnership with the Impakt Freeza youth events committee and the YMCA. The competition is part of the YMCA’s National Skate Park League and provides a development pathway for amateur skate and BMX riders. The winners from the skateboard section will join finalists from concurrent events elsewhere in Victoria, Tasmania and New South Wales, with the national final to be held in Melbourne. Check out: skatepark.ymca.org.au or facebook.com/impaktfreeza Registration times: Scooters 10.30am, BMX noon and skateboards 2pm. Divisions: Scooters and BMX: 14 and under; 15 and over. Skateboard: 12 and under; 16 and under; female all ages, and open.

Rock of ages: Rafael Acosta and son Henry ponder the next 50 years – when the Dromana time capsule will be opened. Pictures: Yanni

(including tea trees), he said. It was hoped they would be planted after the capsule was opened in 2066. Mr Tannahill told those at the capsule sealing ceremony the large rock would ensure the time capsule did not blow away. Mr Hunt praised the committee’s work. “It’s almost exactly four years since I attended the unveiling of a plaque in May 2012 to mark where explorer Matthew Flinders came ashore

at Dromana in 1802,” he said. Flinders, credited with naming Australia (previously known as New Holland), and regarded as one of the great navigators of his time, sailed into the unchartered waters of Port Phillip on 26 April as part of his circumnavigation of Australia between December 1801 and June 1803, which had been commissioned by Joseph Banks. The crowd laughed when Cr Pittock said the rock would ensure the time

capsule did not blow away, but the peninsula was relying on Mr Hunt to ensure it did not wash away through higher sea levels. Mr Hunt grimaced, but did not reply. The foreshore committee is installing the second of several exercise stations on its patch and is about to start building a viewing platform for people in wheelchairs, which will be opposite the information centre. Mike Hast

Clubhouse land PLANS are being considered for the subdivision of the 3.27 hectares surrounding the former clubhouse of the Rosebud Park public course, Elizabeth Drive, Rosebud – not the actual golf course land, as was stated in last week’s edition of The News.