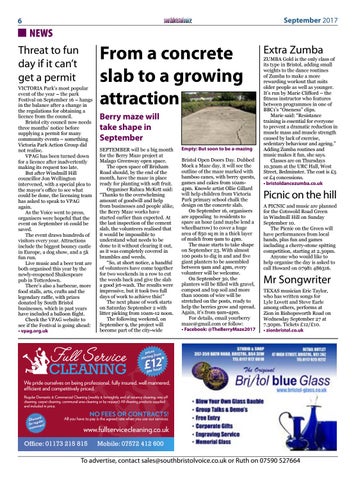 n NEWS Threat to fun day if it can’t get a permit VICTORIA Park’s most popular event of the year – the park Festival on September 16 – hangs in the balance after a change in the regulations for obtaining a licence from the council. Bristol city council now needs three months’ notice before supplying a permit for many community events – something Victoria Park Action Group did not realise. VPAG has been turned down for a licence after inadvertently making its request too late. But after Windmill Hill councillor Jon Wellington intervened, with a special plea to the mayor’s office to see what could be done, the licensing team has asked to speak to VPAG again. As the Voice went to press, organisers were hopeful that the event on September 16 could be saved. The event draws hundreds of visitors every year. Attractions include the biggest bouncy castle in Europe, a dog show, and a 5k fun run. Live music and a beer tent are both organised this year by the newly-reopened Shakespeare pub in Totterdown. There’s also a barbecue, more food stalls, arts, crafts and the legendary raffle, with prizes donated by South Bristol businesses, which in past years have included a balloon flight. Check the VPAG website to see if the Festival is going ahead: • vpag.org.uk

From a concrete slab to a growing attraction Berry maze will take shape in September SEPTEMBER will be a big month for the Berry Maze project at Malago Greenway open space. The open space off Brixham Road should, by the end of the month, have the maze in place ready for planting with soft fruit. Organiser Raluca McKett said: “Thanks to the overwhelming amount of goodwill and help from businesses and people alike, the Berry Maze works have started earlier than expected. At the last inspection of the cement slab, the volunteers realised that it would be impossible to understand what needs to be done to it without clearing it out, as it was completely covered in brambles and weeds. “So, at short notice, a handful of volunteers have come together for two weekends in a row to cut the weeds back and give the slab a good jet-wash. The results were impressive, but it took two full days of work to achieve this!” The next phase of work starts on Saturday September 2 with litter picking from 10am-12 noon. The following weekend, on September 9, the project will become part of the city-wide

Empty: But soon to be a-mazing Bristol Open Doors Day. Dubbed Mock a Maze day, it will see the outline of the maze marked with bamboo canes, with berry quests, games and cakes from 10am4pm. Knowle artist Ollie Gillard will help children from Victoria Park primary school chalk the design on the concrete slab. On September 16, organisers are appealing to residents to spare an hour (and maybe lend a wheelbarrow) to cover a huge area of 850 sq m in a thick layer of mulch from 9am to 4pm. The maze starts to take shape on September 23. With almost 100 posts to dig in and and five giant planters to be assembled between 9am and 4pm, every volunteer will be welcome. On September 30, the planters will be filled with gravel, compost and top soil and more than 1000m of wire will be stretched on the posts, ready to help the berries grow and spread. Again, it’s from 9am-4pm. For details, email yourberry maze@gmail.com or follow: • Facebook: @TheBerryMaze2017

ZUMBA Gold is the only class of its type in Bristol, adding small weights to the dance routines of Zumba to make a more rewarding workout that suits older people as well as younger. It’s run by Marie Clifford – the fitness instructor who features between programmes in one of BBC1’s “Oneness” clips. Marie said: “Resistance training is essential for everyone to prevent a dramatic reduction in muscle mass and muscle strength caused by lack of exercise, sedentary behaviour and ageing.” Adding Zumba routines and music makes it fun, she says. Classes are on Thursdays 10.30am at the URC Hall, West Street, Bedminster. The cost is £5 or £4 concessions. • bristoldancezumba.co.uk

Picnic on the hill A PICNIC and music are planned for the Cotswold Road Green in Windmill Hill on Sunday September 10. The Picnic on the Green will have performances from local bands, plus fun and games including a cherry-stone spitting competition, starting at 2.30pm. Anyone who would like to help organise the day is asked to call Howard on 07981 486316.

Mr Songwriter TEXAS musician Eric Taylor, who has written songs for Lyle Lovett and Steve Earle among others, performs at Zion in Bishopsworth Road on Wednesday September 27 at 7.30pm. Tickets £12/£10. • zionbristol.co.uk

NO FEES OR CONTRACTS!

All you have to pay is the agreed rate when you use our services.