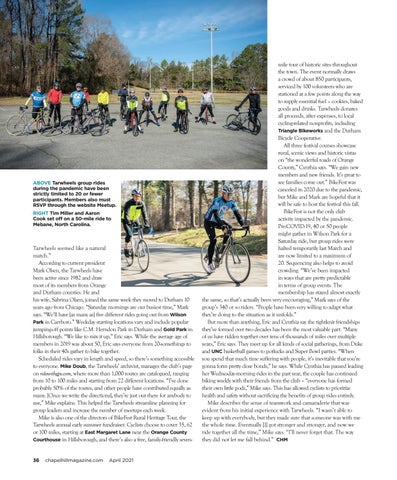 ABOVE Tarwheels group rides during the pandemic have been strictly limited to 20 or fewer participants. Members also must RSVP through the website Meetup. RIGHT Tim Miller and Aaron Cook set off on a 50-mile ride to Mebane, North Carolina.

Tarwheels seemed like a natural match.” According to current president Mark Olsen, the Tarwheels have been active since 1982 and draw most of its members from Orange and Durham counties. He and his wife, Sabrina Olsen, joined the same week they moved to Durham 10 years ago from Chicago. “Saturday mornings are our busiest time,” Mark says. “We’ll have [as many as] five different rides going out from Wilson Park in Carrboro.” Weekday starting locations vary and include popular jumping-off points like C.M. Herndon Park in Durham and Gold Park in Hillsborough. “We like to mix it up,” Eric says. While the average age of members in 2019 was about 50, Eric says everyone from 20-somethings to folks in their 40s gather to bike together. Scheduled rides vary in length and speed, so there’s something accessible to everyone. Mike Doub, the Tarwheels’ archivist, manages the club’s page on ridewithgps.com, where more than 1,000 routes are catalogued, ranging from 10 to 100 miles and starting from 22 different locations. “I’ve done probably 50% of the routes, and other people have contributed equally as many. [Once we write the directions], they’re just out there for anybody to use,” Mike explains. This helped the Tarwheels streamline planning for group leaders and increase the number of meetups each week. Mike is also one of the directors of BikeFest Rural Heritage Tour, the Tarwheels annual early summer fundraiser. Cyclists choose to cover 35, 62 or 100 miles, starting at East Margaret Lane near the Orange County Courthouse in Hillsborough, and there’s also a free, family-friendly seven36

mile tour of historic sites throughout the town. The event normally draws a crowd of about 850 participants, serviced by 100 volunteers who are stationed at a few points along the way to supply essential fuel – cookies, baked goods and drinks. Tarwheels donates all proceeds, after expenses, to local cycling-related nonprofits, including Triangle Bikeworks and the Durham Bicycle Cooperative. All three festival courses showcase rural, scenic views and historic vistas on “the wonderful roads of Orange County,” Cynthia says. “We gain new members and new friends. It’s great to see families come out.” BikeFest was canceled in 2020 due to the pandemic, but Mike and Mark are hopeful that it will be safe to host the festival this fall. BikeFest is not the only club activity impacted by the pandemic. Pre-COVID-19, 40 or 50 people might gather in Wilson Park for a Saturday ride, but group rides were halted temporarily last March and are now limited to a maximum of 20. Sequencing also helps to avoid crowding. “We’ve been impacted in ways that are pretty predictable in terms of group events. The membership has stayed almost exactly the same, so that’s actually been very encouraging,” Mark says of the group’s 340 or so riders. “People have been very willing to adapt what they’re doing to the situation as it unfolds.” But more than anything, Eric and Cynthia say the tightknit friendships they’ve formed over two decades has been the most valuable part. “Many of us have ridden together over tens of thousands of miles over multiple years,” Eric says. They meet up for all kinds of social gatherings, from Duke and UNC basketball games to potlucks and Super Bowl parties. “When you spend that much time suffering with people, it’s inevitable that you’re gonna form pretty close bonds,” he says. While Cynthia has paused leading her Wednesday-morning rides in the past year, the couple has continued biking weekly with their friends from the club – “everyone has formed their own little pods,” Mike says. This has allowed cyclists to prioritize health and safety without sacrificing the benefits of group rides entirely. Mike describes the sense of teamwork and camaraderie that was evident from his initial experience with Tarwheels. “I wasn’t able to keep up with everybody, but they made sure that someone was with me the whole time. Eventually [I] got stronger and stronger, and now we ride together all the time,” Mike says. “I’ll never forget that. The way they did not let me fall behind.” CHM