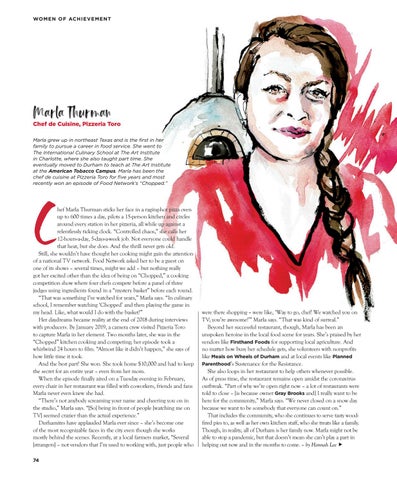 Chef de Cuisine, Pizzeria Toro Marla grew up in northeast Texas and is the first in her family to pursue a career in food service. She went to The International Culinary School at The Art Institute in Charlotte, where she also taught part time. She eventually moved to Durham to teach at The Art Institute at the American Tobacco Campus. Marla has been the chef de cuisine at Pizzeria Toro for five years and most recently won an episode of Food Network’s “Chopped.”

hef Marla Thurman sticks her face in a raging-hot pizza oven up to 600 times a day, pilots a 15-person kitchen and circles around every station in her pizzeria, all while up against a relentlessly ticking clock. “Controlled chaos,” she calls her 12-hours-a-day, 5-days-a-week job. Not everyone could handle that heat, but she does. And the thrill never gets old. Still, she wouldn’t have thought her cooking might gain the attention of a national TV network. Food Network asked her to be a guest on one of its shows – several times, might we add – but nothing really got her excited other than the idea of being on “Chopped,” a cooking competition show where four chefs compete before a panel of three judges using ingredients found in a “mystery basket” before each round. “That was something I’ve watched for years,” Marla says. “In culinary school, I remember watching ‘Chopped’ and then playing the game in my head. Like, what would I do with the basket?” Her daydreams became reality at the end of 2018 during interviews with producers. By January 2019, a camera crew visited Pizzeria Toro to capture Marla in her element. Two months later, she was in the “Chopped” kitchen cooking and competing; her episode took a whirlwind 24 hours to film. “Almost like it didn’t happen,” she says of how little time it took. And the best part? She won. She took home $10,000 and had to keep the secret for an entire year – even from her mom. When the episode finally aired on a Tuesday evening in February, every chair in her restaurant was filled with co-workers, friends and fans Marla never even knew she had. “There’s not anybody screaming your name and cheering you on in the studio,” Marla says. “[So] being in front of people [watching me on TV] seemed crazier than the actual experience.” Durhamites have applauded Marla ever since – she’s become one of the most recognizable faces in the city even though she works mostly behind the scenes. Recently, at a local farmers market, “Several [strangers] – not vendors that I’m used to working with, just people who 74

were there shopping – were like, ‘Way to go, chef! We watched you on TV; you’re awesome!’” Marla says. “That was kind of surreal.” Beyond her successful restaurant, though, Marla has been an unspoken heroine in the local food scene for years. She’s praised by her vendors like Firsthand Foods for supporting local agriculture. And no matter how busy her schedule gets, she volunteers with nonprofits like Meals on Wheels of Durham and at local events like Planned Parenthood’s Sustenance for the Resistance. She also loops in her restaurant to help others whenever possible. As of press time, the restaurant remains open amidst the coronavirus outbreak. “Part of why we’re open right now – a lot of restaurants were told to close – [is because owner Gray Brooks and] I really want to be here for the community,” Marla says. “We never closed on a snow day because we want to be somebody that everyone can count on.” That includes the community, who she continues to serve tasty woodfired pies to, as well as her own kitchen staff, who she treats like a family. Though, in reality, all of Durham is her family now. Marla might not be able to stop a pandemic, but that doesn’t mean she can’t play a part in helping out now and in the months to come. – by Hannah Lee 