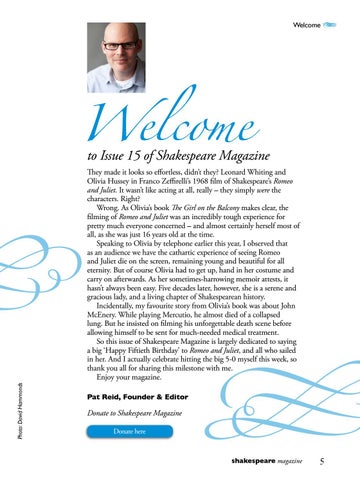 to Issue 15 of Shakespeare Magazine

They made it looks so effortless, didn’t they? Leonard Whiting and Olivia Hussey in Franco Zeffirelli’s 1968 film of Shakespeare’s Romeo and Juliet. It wasn’t like acting at all, really – they simply were the characters. Right? Wrong. As Olivia’s book The Girl on the Balcony makes clear, the filming of Romeo and Juliet was an incredibly tough experience for pretty much everyone concerned – and almost certainly herself most of all, as she was just 16 years old at the time. Speaking to Olivia by telephone earlier this year, I observed that as an audience we have the cathartic experience of seeing Romeo and Juliet die on the screen, remaining young and beautiful for all eternity. But of course Olivia had to get up, hand in her costume and carry on afterwards. As her sometimes-harrowing memoir attests, it hasn’t always been easy. Five decades later, however, she is a serene and gracious lady, and a living chapter of Shakespearean history. Incidentally, my favourite story from Olivia’s book was about John McEnery. While playing Mercutio, he almost died of a collapsed lung. But he insisted on filming his unforgettable death scene before allowing himself to be sent for much-needed medical treatment. So this issue of Shakespeare Magazine is largely dedicated to saying a big ‘Happy Fiftieth Birthday’ to Romeo and Juliet, and all who sailed in her. And I actually celebrate hitting the big 5-0 myself this week, so thank you all for sharing this milestone with me. Enjoy your magazine. Pat Reid, Founder &amp; Editor