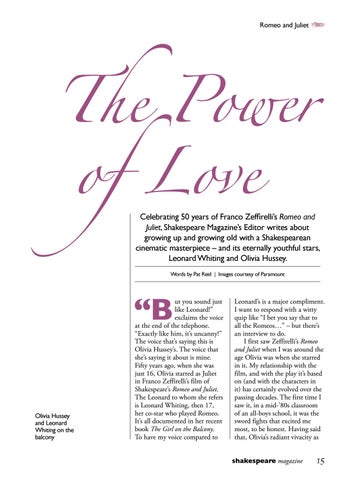 The Power of Love

Olivia Hussey and Leonard Whiting on the balcony

ut you sound just like Leonard!” exclaims the voice at the end of the telephone. “Exactly like him, it’s uncanny!” The voice that’s saying this is Olivia Hussey’s. The voice that she’s saying it about is mine. Fifty years ago, when she was just 16, Olivia starred as Juliet in Franco Zeffirelli’s film of Shakespeare’s Romeo and Juliet. The Leonard to whom she refers is Leonard Whiting, then 17, her co-star who played Romeo. It’s all documented in her recent book The Girl on the Balcony. To have my voice compared to

Leonard’s is a major compliment. I want to respond with a witty quip like “I bet you say that to all the Romeos…” – but there’s an interview to do. I first saw Zeffirelli’s Romeo and Juliet when I was around the age Olivia was when she starred in it. My relationship with the film, and with the play it’s based on (and with the characters in it) has certainly evolved over the passing decades. The first time I saw it, in a mid-’80s classroom of an all-boys school, it was the sword fights that excited me most, to be honest. Having said that, Olivia’s radiant vivacity as shakespeare magazine