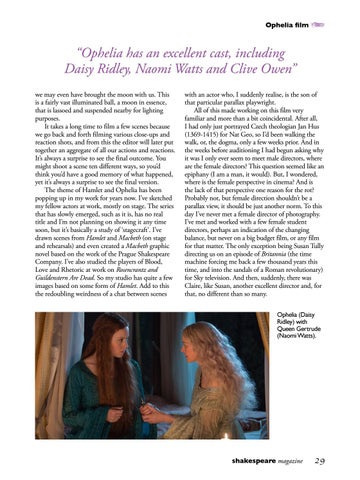 “Ophelia has an excellent cast, including Daisy Ridley, Naomi Watts and Clive Owen” we may even have brought the moon with us. This is a fairly vast illuminated ball, a moon in essence, that is lassoed and suspended nearby for lighting purposes. It takes a long time to film a few scenes because we go back and forth filming various close-ups and reaction shots, and from this the editor will later put together an aggregate of all our actions and reactions. It’s always a surprise to see the final outcome. You might shoot a scene ten different ways, so you’d think you’d have a good memory of what happened, yet it’s always a surprise to see the final version. The theme of Hamlet and Ophelia has been popping up in my work for years now. I’ve sketched my fellow actors at work, mostly on stage. The series that has slowly emerged, such as it is, has no real title and I’m not planning on showing it any time soon, but it’s basically a study of ‘stagecraft’. I’ve drawn scenes from Hamlet and Macbeth (on stage and rehearsals) and even created a Macbeth graphic novel based on the work of the Prague Shakespeare Company. I’ve also studied the players of Blood, Love and Rhetoric at work on Rosencrantz and Guildenstern Are Dead. So my studio has quite a few images based on some form of Hamlet. Add to this the redoubling weirdness of a chat between scenes

with an actor who, I suddenly realise, is the son of that particular parallax playwright. All of this made working on this film very familiar and more than a bit coincidental. After all, I had only just portrayed Czech theologian Jan Hus (1369-1415) for Nat Geo, so I’d been walking the walk, or, the dogma, only a few weeks prior. And in the weeks before auditioning I had begun asking why it was I only ever seem to meet male directors, where are the female directors? This question seemed like an epiphany (I am a man, it would). But, I wondered, where is the female perspective in cinema? And is the lack of that perspective one reason for the rot? Probably not, but female direction shouldn’t be a parallax view, it should be just another norm. To this day I’ve never met a female director of photography. I’ve met and worked with a few female student directors, perhaps an indication of the changing balance, but never on a big budget film, or any film for that matter. The only exception being Susan Tully directing us on an episode of Britannia (the time machine forcing me back a few thousand years this time, and into the sandals of a Roman revolutionary) for Sky television. And then, suddenly, there was Claire, like Susan, another excellent director and, for that, no different than so many. Ophelia (Daisy Ridley) with Queen Gertrude (Naomi Watts).