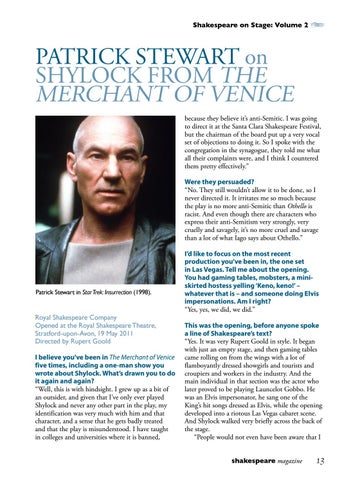 PATRICK STEWART on SHYLOCK FROM THE MERCHANT OF VENICE because they believe it’s anti-Semitic. I was going to direct it at the Santa Clara Shakespeare Festival, but the chairman of the board put up a very vocal set of objections to doing it. So I spoke with the congregation in the synagogue, they told me what all their complaints were, and I think I countered them pretty effectively.” Were they persuaded? “No. They still wouldn’t allow it to be done, so I never directed it. It irritates me so much because the play is no more anti-Semitic than Othello is racist. And even though there are characters who express their anti-Semitism very strongly, very cruelly and savagely, it’s no more cruel and savage than a lot of what Iago says about Othello.”

Royal Shakespeare Company Opened at the Royal Shakespeare Theatre, Stratford-upon-Avon, 19 May 2011 Directed by Rupert Goold I believe you’ve been in The Merchant of Venice five times, including a one-man show you wrote about Shylock. What’s drawn you to do it again and again? “Well, this is with hindsight. I grew up as a bit of an outsider, and given that I’ve only ever played Shylock and never any other part in the play, my identification was very much with him and that character, and a sense that he gets badly treated and that the play is misunderstood. I have taught in colleges and universities where it is banned,

I’d like to focus on the most recent production you’ve been in, the one set in Las Vegas. Tell me about the opening. You had gaming tables, mobsters, a miniskirted hostess yelling ‘Keno, keno!’ – whatever that is – and someone doing Elvis impersonations. Am I right? “Yes, yes, we did, we did.” This was the opening, before anyone spoke a line of Shakespeare’s text? “Yes. It was very Rupert Goold in style. It began with just an empty stage, and then gaming tables came rolling on from the wings with a lot of flamboyantly dressed showgirls and tourists and croupiers and workers in the industry. And the main individual in that section was the actor who later proved to be playing Launcelot Gobbo. He was an Elvis impersonator, he sang one of the King’s hit songs dressed as Elvis, while the opening developed into a riotous Las Vegas cabaret scene. And Shylock walked very briefly across the back of the stage. “People would not even have been aware that I shakespeare magazine