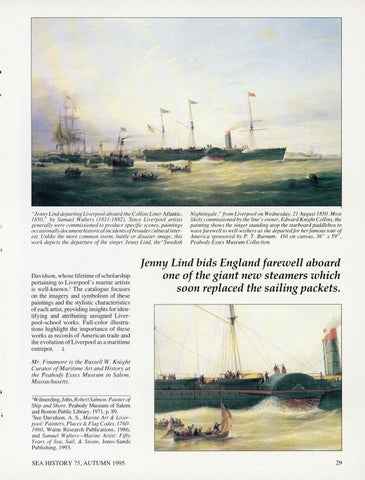 Davidson, whose lifetime of scholarship pertaining to Liverpool &#39;s marine artists is well-known. 2 The catalogue focuses on the imagery and symbolism of these paintings and the stylistic characteristics of each artist, providing insights for identifying and attributing unsigned Liverpool-school works. Full-color illustrations highlight the importance of these works as records of American trade and the evolution of Liverpool as a maritime entrepot. t

Nightingale,&quot; from Liverpool on Wednesday, 2 1 August 1850. Most likely commissioned by the line&#39;s owner, Edward Knight Collins , the painting shows the singer standing atop the starboard paddlebox to wave farewell to well-wishers as she departed for her famous tour of America sponsored by P. T. Barnum. Oil on canvas, 36&quot; x 59&quot;, Peabody Essex Museum Collection.

Jenny Lind bids England farewell aboard one of the giant new steamers which soon replaced the sailing packets.