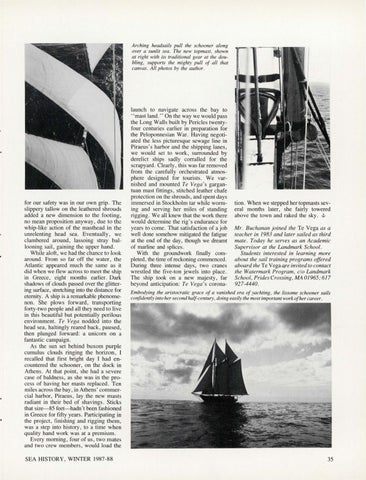 Arching headsails pull the schooner along over a sunlit sea . The new topmast, shown at right with its traditional gear at the doubling , supports the mighty pull of all that canvas. All photos by the author.

for our safety was in our own grip. The slippery tallow on the leathered shrouds added a new dimension to the footing, no mean proposition anyway, due to the whip-like action of the masthead in the unrelenting head sea. Eventually, we clambered around, lassoing stray ballooning sail, gaining the upper hand. While aloft, we had the chance to look around. From so far off the water, the Atlantic appeared much the same as it did when we flew across to meet the ship in Greece, eight months earlier. Dark shadows of clouds passed over the glittering surface, stretching into the distance for eternity . A ship is a remarkable phenomenon. She plows forward, transporting forty-two people and all they need to live in this beautiful but potentially perilous environment. Te Vega nodded into the head sea , haltingly reared back , paused , then plunged forward: a unicorn on a fantastic campaign. As the sun set behind buxom purple cumulus clouds ringing the horizon, I recalled that first bright day I had encountered the. schooner, on the dock in Athens. At that point, she had a severe case of baldness , as she was in the process of having her masts replaced . Ten miles across the bay, in Athens&#39; commercial harbor, Piraeus, lay the new masts radiant in their bed of shavings. Sticks that size-85 feet-hadn&#39;t been fashioned in Greece for fifty years. Participating in the project, finishing and rigging them , was a step into history, to a time when quality hand work was at a premium . Every morning , four of us, two mates and two crew members, would load the SEA HISTORY, WINTER 1987-88

launch to navigate across the bay to &quot;mast land .&quot; On the way we would pass the Long Walls built by Pericles twentyfour centuries earlier in preparation for the Peloponnesian War. Having negotiated the less picturesque sewage line in Piraeus &#39; s harbor and the shipping lanes, we would set to work, surrounded by derelict ships sadly corralled for the scrapyard. Clearly , this was far removed from the carefully orchestrated atmosphere designed for tourists . We varnished and mounted Te Vega&#39;s gargantuan mast fittings, stitched leather chafe protection on the shrouds, and spent days immersed in Stockholm tar while worming and serving her miles of standing rigging. We all knew that the work there would determine the rig&#39;s endurance for years to come. That satisfaction of a job well done somehow mitigated the fatigue at the end of the day, though we dreamt of marline and splices . With the groundwork finally completed, the time of reckoning commenced. During three intense days, two cranes wrestled the five-ton jewels into place. The ship took on a new majesty, far beyond anticipation: Te Vega&#39; s corona-

ti on. When we stepped her topmasts several months later, she fairly towered above the town and raked the sky. w

Mr . Buchanan joined the Te Vega as a teacher in 1983 and later sailed as third mate . Today he serves as an Academic Supervisor at the Landmark School. Students interested in learning more about the sail training programs offered aboard the Te Vega are invited to contact the Watermark Program, c/o Landmark School, Prides Crossing, MA 01965;617 927-4440.

Embodying the aristocratic grace of a vanished era of yachting , the lissome schooner sails confidently into her second half-century, doing easily the most important work of her career.