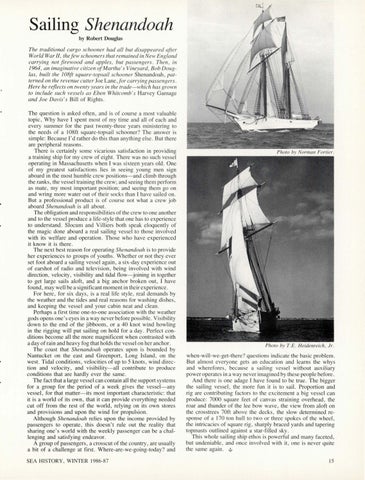 The traditional cargo schooner had all but disappeared after World War II , the few schooners that remained in New England carrying not fi rewood and apples, but passengers. Then , in 1964, an imaginative citizen of Martha &#39; s Vineyard, Bob Douglas, built the 108ft square-topsail schooner Shenandoah , patterned on the revenue cutter Joe Lane.for carrying passengers. Here he reflects on twenty years in the trade-which has grown to include such vessels as Eben Whit comb&#39;s Harvey Gamage and Joe Davis&#39;s Bill of Ri ghts. The question is asked often, and is of course a most valuable topic , Why have I spent most of my time and all of each and every summer for the past twenty-three years ministeri ng to the needs of a I08ft square-topsai l schooner? The answer is simple: Because I&#39;d rat her do thi s than anything else. But there are peripheral reasons. There is certainly some vicarious satisfaction in providing a training ship for my crew of eight. There was no such vessel operating in Massachusetts when I was sixteen years old. One of my greatest satisfactions lies in seeing young men sign aboard in the most humble crew positions-and climb through the ranks , the vessel training the crew ; and seeing them perform as mate , my most important position ; and seeing them go on and wring more water out of their socks than I have sailed on . But a profess ional product is of course not what a crew job aboard Shenandoah is all abo ut. The obli gation and responsibilities of the crew to one another and to the vessel produce a li fe-sty le that one has to experience to understand. Slocum and Villiers both speak e loquently of the magic done aboard a real sailing vessel to those in volved with its welfare and operation. Those who have experienced it know it is there. The next best reason for operating Shenandoah is to provide her ex periences to groups of youths. Whether or not they ever set foot aboard a sailing vessel again , a six-day experience out of earshot of radio and te levision, being involved with wind direction, velocity , visibility and tidal flow-joining in together to get large sail s aloft, and a big anchor broken out , I have found , may well be a significant moment in their experience. For here, for six days, is a real life style, real demands by the weather and the tides and real reasons for washing dishes , and keeping the vessel and your cabi n neat and c lean. Perhaps a first time one-to-one assoc iation with the weather gods opens one&#39;s eyes in a way never before possible. Visibility down to the end of the jibboom , or a 40 knot wind howli ng in the ri gg ing wi ll put sailing on hold fo r a day . Perfect conditions become all the more magnificent when contrasted with a day of rain and heavy fog that holds the vessel on her anchor. The coast that Shenandoah operates upon is bounded by Nantucket on the east and Greenport, Long Island , on the west. Tidal conditions, velocities of up to 5 knots, wind direction and velocity, and visibility- all contribute to produce conditions that are hardly ever the same . The fact that a large vessel can contain all the support systems for a group for the period of a week g ives the vessel-any vessel, for that matter- its most important characteristic: that it is a world of its own, that it can provide everything needed cut off from the rest of the world , relying on its own stores and provisions and upon the wind fo r propulsion. Although Shenandoah relies upon the income provided by passengers to operate , this doesn&#39; t rule out the reality that sharing one&#39;s world with the weekly passenger can be a challenging and satisfying endeavor. A group of passengers, a crosscut of the country, are usuall y a bit of a challenge at first. Where-are-we-going-today ? and SEA HI STORY , WINTER 1986-87

when- wi ll -we-get-there? questions indicate the basic problem . But almost everyone gets an education and learns the whys and wherefores , because a sailing vessel without auxiliary power operates in a way never imagined by these people before. And there is one adage I have found to be true. The bigger the sa iling vessel , the more fun it is to sail. Proportion and ri g are contributing factors to the exc itement a big vessel can produce: 7000 sq uare fee t of canvas straining overhead , the roar and thunder of the lee bow wave, the view from aloft on the crosstrees 70ft above the decks , the slow determined respon se of a 170 ton hull to two or three spokes of the wheel , the intricacies of square rig , sharply braced yards and tapering topmasts outlined agai nst a star-fi lled sky. Thi s whole sailing ship ethos is powerful and many faceted., but undeniable, and once involved with it , one is never quite the same again. .i.. 15