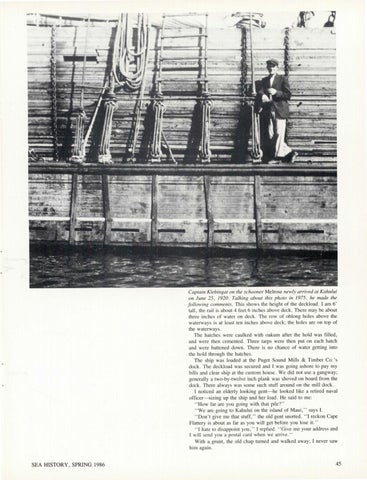 Captain Klebingat on the schooner Melrose newly arrived at Kahului on June 25, 1920. Talking about this photo in 1975, he made the following comments. This shows the height of the deckload. I am 6' tall , the rail is about 4 feet 6 inches above deck. There may be about three inches of water on deck . The row of oblong holes above the waterways is at least ten inches above deck; the holes are on top of the waterways. The hatches were caulked with oakum after the hold was filled, and were then cemented. Three tarps were then put on each hatch and were battened down. There is no chance of water getting into the hold through the hatches. The ship was loaded at the Puget Sound Mills & Timber Co. 's dock . The deckload was secured and I was going ashore to pay my bills and clear ship at the custom house. We did not use a gangway; generally a two-by-twelve inch plank was shoved on board from the dock. There always was some such stuff around on the mill dock. I noticed an elderly looking gent-he looked like a retired naval officer-sizing up the ship and her load. He said to me: "How far are you going with that pile? " "We are going to Kahului on the island of Maui," says I. " Don ' t give me that stuff," the old gent snorted. "I reckon Cape Flattery is about as far as you will get before you lose it. " "I hate to disappoint you ," I replied. " Give me your address and I will send you a postal card when we arrive. " With a grunt, the old chap turned and walked away; I never saw him again.