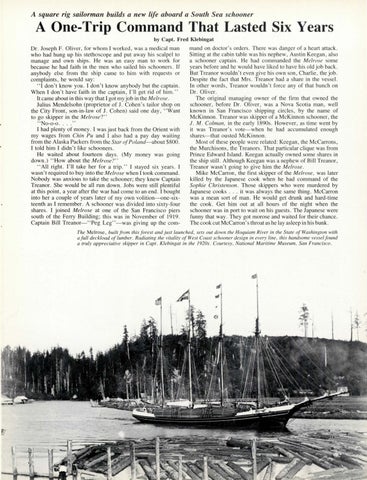 Dr. Joseph F. Oliver, for whom I worked , was a medical man who had hung up hi s stethoscope and put away his scalpel to manage and own ships. He was an easy man to work for because he had faith in the men who sailed hi s schooners. If anybody else from the ship came to him with requests or complaints, he would say: "I don 't know you. I don't know anybody but the captain. When I don't have faith in the captain, I' ll get rid of him ." It came about in this way that I got my job in the Melrose. Julius Mendelsohn (proprietor of J. Cohen's tailor shop on the City Front, son-i n-law of J . Cohen) said one day , " Want to go skipper in the Melrose?" " No-o-o . ... " I had plenty of money . I was just back from the Orient with my wages from Chin Pu and I also had a pay day waiting from the Alaska Packers from the Star of Poland-about $800. I told him I didn ' t like schooners. He waited about fourteen days. (My money was going down.) "How about the Melrose?" "All right. f'll take her for a trip ." I stayed six years. I wasn' t required to buy into the Melrose when I took command. Nobody was anxious to take the schooner; they knew Captain Treanor. She would be all run down. Jobs were still plentiful at this point , a year after the war had come to an end. I bought into her a couple of years late r of my own volition--one-sixteenth as I remember. A schooner was divided into sixty-four shares. I joined Melrose at one of the San Francisco piers south of the Ferry Building; this was in November of 1919 . Captain Bill Treanor-" Peg Leg " -was giv ing up the com-

mand on doctor's orders . There was danger of a heart attack . Sitting at the cabin table was hi s nephew , Austin Keegan, also a schooner captain. He had commanded the Melrose some years before and he would have liked to have his old job back . But Treanor wouldn ' t even give his own son , Charlie , the job. Despite the fact that Mrs. Treanor had a share in the vessel. ln other words, Treanor wouldn ' t force any of that bunch on Dr. Oliver. The origi nal managing owner of the firm that owned the schooner, before Dr. Oliver , was a Nova Scotia man , well known in San Francisco shipping circles , by the name of McKinnon . Treanor was skipper of a McKinnon schooner, the J.M. Colman , in the early 1890s. However, as time went by it was Treanor's vote- when he had accumulated enough shares-that ousted McKinnon . Most of these people were related: Keegan , the McCarrons , the Murchisons , the Treanors . That particular clique was from Prince Edward Island . Keegan actually owned some shares in the ship sti ll. Although Keegan was a nephew of Bill Treanor, Treanor wasn't going to give him the Melrose. Mike Mccarron , the first skipper of the Melrose , was later killed by the Japanese cook when he had command of the Sophie Christenson. Those skippers who were murdered by Japanese cooks . . . it was always the same thing. Mccarron was a mean sort of man. He would get drunk and hard-time the cook. Get him out at all hours of the night when the schooner was in port to wait on hi s guests . The Japanese were funny that way. They got morose and waited for their chance . The cook cut McCarron's throat as he lay asleep in hi s bunk .

The Melrose, built from this forest and just launched, sets out down the Hoquiam River in the State of Washington with a full deckload of lumber. Radiating the vitality of West Coast schooner design in every line, this handsome vessel found a truly appreciative skipper in Capt. Klebingat in the 1920s. Courtesy, National Maritim e Museum, San Francisco.