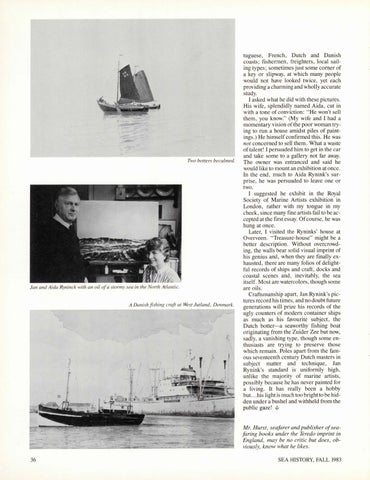 Jan and Aida Ryninck with an oil of a stormy sea in the North Atlantic.

tuguese, French, Dutch and Danish coasts ; fishermen, freighters, local sailing types ; sometimes just some corner of a key or slipway, at which many people would not have looked twice, yet each providing a charming and wholly accurate study. I asked what he did with these pictures. His wife, splendidly named Aida, cut in with a tone of conviction: "He won't sell them , you know." (My wife and I had a momentary vision of the poor woman trying to run a house amidst piles of paintings.) He himself confirmed this. He was not concerned to sell them. What a waste of talent! I persuaded him to get in the car and take some to a gallery not far away. The owner was entranced and said he would like to mount an exhibition at once. In the end , much to Aida Rynink's surprise, he was persuaded to leave one or two. I suggested he exhibit in the Royal Society of Marine Artists exhibition in London, rather with my tongue in my cheek , since many fine artists fai l to be accepted at the first essay. Of course, he was hung at once. Later, I visited the Ryninks' house at Overveen . "Treasure-house" might be a better description. Without overcrowding, the walls bear solid visual imprint of his genius and , when they are finally exhausted , there are many fo lios of delightful records of ships and craft, docks and coastal scenes and , inevitably, the sea itself. Most are watercolors , though some are oils. Craftsmanship apart, Jan Rynink's pictures record his times, and no doubt future generations will prize his records of the ugly counters of modern container ships as much as his favourite subject, the Dutch botter-a seaworthy fishing boat originating from the Zuider Zee but now, sadly, a vanishing type, though some enthusiasts are trying to preserve those which remain. Poles apart from the famous seventeenth century Dutch masters in subject matter and technique, Jan Rynink's standard is uniformly high, unlike the majority of marine artists, possibly because he has never painted for a living. It has really been a hobby but. .. his light is much too bright to be hidden under a bushel and withheld from the public gaze! .V

Mr. Hurst, seafarer and publisher of seafaring books under the Teredo imprint in England, may be no critic but does , obviously, know what he likes. 36