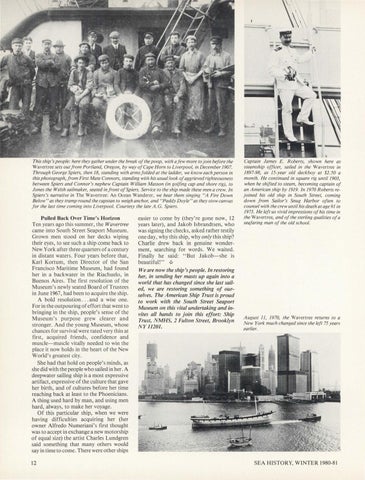 This ship's people: here they gather under the break of the poop, with a few more to join before the

Wavertree sets out from Portland, Oregon, by way of Cape Horn to Liverpool, in December I907. Through George Spiers, then I8, standing with arms folded at the ladder, we know each person in this photograph, from First Mate Connors, standing with his usual look of aggrieved righteousness between Spiers and Connor's nephew Captain William Masson (in golfing cap and shore rig), to Jones the Welsh sailmaker, seated in front of Spiers. Service to the ship made these men a crew. In Spiers's narrative in The Wavertree: An Ocean Wanderer, we hear them singing "A Fire Down Below" as they tramp round the capstan to weigh anchor, and "Paddy Doyle" as they stow canvas for the last time coming into Liverpool. Courtesy the late A.G. Spiers.

Pulled Back Over Time's Horizon Ten years ago this summer, the Wavertree came into South Street Seaport Museum. Grown men stood on her decks wiping their eyes, to see such a ship come back to New York after three quarters of a century in distant waters. Four years before that, Karl Kortum, then Director of the San Francisco Maritime Museum, had found her in a backwater in the Riachuelo, in Buenos Aires. The first resolution of the Museum's newly seated Board of Trustees in June 1967, had been to acquire the ship. A bold resolution ... and a wise one. For in the outpouring of effort that went to bringing in the ship, people's sense of the Museum's purpose grew clearer and stronger. And the young Museum, whose chances for survival were rated very thin at first, acquired friends, confidence and muscle-muscle vitally needed to win the place it now holds in the heart of the New World's greatest city. She had that hold on people's minds, as she did with the people who sailed in her. A deepwater sailing ship is a most expressive artifact, expressive of the culture that gave her birth, and of cultures before her time reaching back at least to the Phoenicians . A thing used hard by man, and using men hard, always, to make her voyage. Of this particular ship, when we were having difficulties acquiring her (her owner Alfredo Numeriani's first thought was to accept in exchange a new motorship of equal size) the artist Charles Lundgren said something that many others would say in time to come. There were other ships

easier to come by (they're gone now, 12 years later), and Jakob lsbrandtsen, who was signing the checks, asked rather testily one day, why this ship, why only this ship? Charlie drew back in genuine wonderment, searching for words. We waited. Finally he said: "But Jakob-she is beautiful!" w

We are now the ship's people. In restoring her, in sending her masts up again into a world that has changed since she last sailed, we are restoring something of ourselves. The American Ship Trust is proud to work with the South Street Seaport Museum on this vital undertaking and invites all hands to join this effort: Ship Trust, NMHS, 2 Fulton Street, Brooklyn NY 11201.

Captain James ÂŁ. Roberts, shown here as steamship officer, sailed in the Wavertree in I897-98, as I5-year old deckboy al $2.50 a month. He continued in square rig until I903, when he shifted to steam, becoming captain of an American ship by I9I9. In I970 Roberts rejoined his old ship in South Street, coming down from Sailor's Snug Harbor often to counsel with the crew until his death at age 9I in I973. He left us vivid impressions of his time in the Wavertree, and of the sterling qualities of a seafaring man of the old school.

August I I, I970, the Wavertree returns to a New York much changed since she left 75 years earlier.