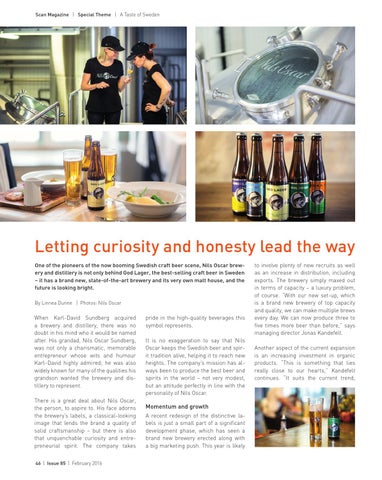 Letting curiosity and honesty lead the way One of the pioneers of the now booming Swedish craft beer scene, Nils Oscar brewery and distillery is not only behind God Lager, the best-selling craft beer in Sweden – it has a brand new, state-of-the-art brewery and its very own malt house, and the future is looking bright. By Linnea Dunne | Photos: Nils Oscar

When Karl-David Sundberg acquired a brewery and distillery, there was no doubt in his mind who it would be named after. His grandad, Nils Oscar Sundberg, was not only a charismatic, memorable entrepreneur whose wits and humour Karl-David highly admired; he was also widely known for many of the qualities his grandson wanted the brewery and distillery to represent. There is a great deal about Nils Oscar, the person, to aspire to. His face adorns the brewery’s labels, a classical-looking image that lends the brand a quality of solid craftsmanship – but there is also that unquenchable curiosity and entrepreneurial spirit. The company takes 46 | Issue 85 | February 2016

pride in the high-quality beverages this symbol represents. It is no exaggeration to say that Nils Oscar keeps the Swedish beer and spirit tradition alive, helping it to reach new heights. The company’s mission has always been to produce the best beer and spirits in the world – not very modest, but an attitude perfectly in line with the personality of Nils Oscar.

Momentum and growth A recent redesign of the distinctive labels is just a small part of a significant development phase, which has seen a brand new brewery erected along with a big marketing push. This year is likely

to involve plenty of new recruits as well as an increase in distribution, including exports. The brewery simply maxed out in terms of capacity – a luxury problem, of course. “With our new set-up, which is a brand new brewery of top capacity and quality, we can make multiple brews every day. We can now produce three to five times more beer than before,” says managing director Jonas Kandefelt. Another aspect of the current expansion is an increasing investment in organic products. “This is something that lies really close to our hearts,” Kandefelt continues. “It suits the current trend,