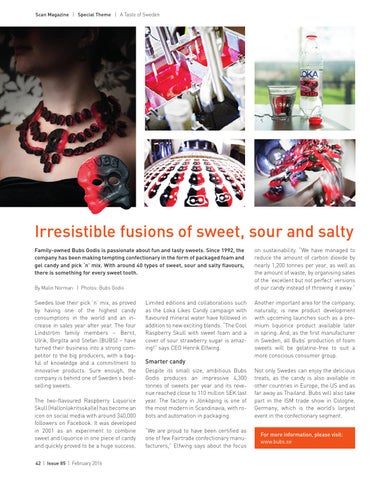 Irresistible fusions of sweet, sour and salty Family-owned Bubs Godis is passionate about fun and tasty sweets. Since 1992, the company has been making tempting confectionary in the form of packaged foam and gel candy and pick ‘n’ mix. With around 40 types of sweet, sour and salty flavours, there is something for every sweet tooth. By Malin Norman | Photos: Bubs Godis

Swedes love their pick ’n’ mix, as proved by having one of the highest candy consumptions in the world and an increase in sales year after year. The four Lindström family members – Bernt, Ulrik, Birgitta and Stefan (BUBS) – have turned their business into a strong competitor to the big producers, with a bagful of knowledge and a commitment to innovative products. Sure enough, the company is behind one of Sweden’s bestselling sweets. The two-flavoured Raspberry Liquorice Skull (Hallonlakritsskalle) has become an icon on social media with around 340,000 followers on Facebook. It was developed in 2001 as an experiment to combine sweet and liquorice in one piece of candy and quickly proved to be a huge success. 42 | Issue 85 | February 2016

Limited editions and collaborations such as the Loka Likes Candy campaign with flavoured mineral water have followed in addition to new exciting blends. “The Cool Raspberry Skull with sweet foam and a cover of sour strawberry sugar is amazing!” says CEO Henrik Elfwing.

Smarter candy Despite its small size, ambitious Bubs Godis produces an impressive 4,300 tonnes of sweets per year and its revenue reached close to 110 million SEK last year. The factory in Jönköping is one of the most modern in Scandinavia, with robots and automation in packaging. “We are proud to have been certified as one of few Fairtrade confectionary manufacturers,” Elfwing says about the focus

on sustainability. “We have managed to reduce the amount of carbon dioxide by nearly 1,200 tonnes per year, as well as the amount of waste, by organising sales of the ‘excellent but not perfect’ versions of our candy instead of throwing it away.” Another important area for the company, naturally, is new product development with upcoming launches such as a premium liquorice product available later in spring. And, as the first manufacturer in Sweden, all Bubs’ production of foam sweets will be gelatine-free to suit a more conscious consumer group. Not only Swedes can enjoy the delicious treats, as the candy is also available in other countries in Europe, the US and as far away as Thailand. Bubs will also take part in the ISM trade show in Cologne, Germany, which is the world’s largest event in the confectionary segment. For more information, please visit: www.bubs.se