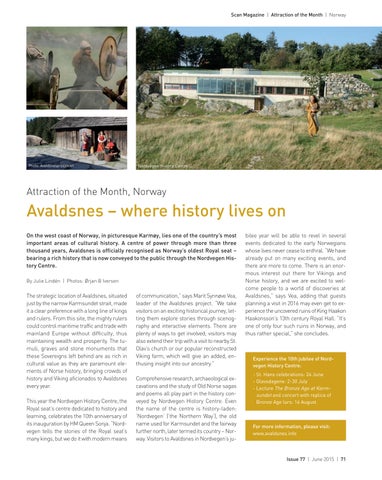 Attraction of the Month, Norway

Avaldsnes – where history lives on On the west coast of Norway, in picturesque Karmøy, lies one of the country’s most important areas of cultural history. A centre of power through more than three thousand years, Avaldsnes is officially recognised as Norway’s oldest Royal seat – bearing a rich history that is now conveyed to the public through the Nordvegen History Centre. By Julie Lindén | Photos: Ørjan B Iversen

The strategic location of Avaldsnes, situated just by the narrow Karmsundet strait, made it a clear preference with a long line of kings and rulers. From this site, the mighty rulers could control maritime traffic and trade with mainland Europe without difficulty, thus maintaining wealth and prosperity. The tumuli, graves and stone monuments that these Sovereigns left behind are as rich in cultural value as they are paramount elements of Norse history, bringing crowds of history and Viking aficionados to Avaldsnes every year. This year the Nordvegen History Centre, the Royal seat’s centre dedicated to history and learning, celebrates the 10th anniversary of its inauguration by HM Queen Sonja. “Nordvegen tells the stories of the Royal seat’s many kings, but we do it with modern means

of communication,” says Marit Synnøve Vea, leader of the Avaldsnes project. “We take visitors on an exciting historical journey, letting them explore stories through scenography and interactive elements. There are plenty of ways to get involved; visitors may also extend their trip with a visit to nearby St. Olav’s church or our popular reconstructed Viking farm, which will give an added, enthusing insight into our ancestry.” Comprehensive research, archaeological excavations and the study of Old Norse sagas and poems all play part in the history conveyed by Nordvegen History Centre. Even the name of the centre is history-laden: ‘Nordvegen’ (‘the Northern Way’), the old name used for Karmsundet and the fairway further north, later termed its country – Norway. Visitors to Avaldsnes in Nordvegen’s ju-

bilee year will be able to revel in several events dedicated to the early Norwegians whose lives never cease to enthral. “We have already put on many exciting events, and there are more to come. There is an enormous interest out there for Vikings and Norse history, and we are excited to welcome people to a world of discoveries at Avaldsnes,” says Vea, adding that guests planning a visit in 2016 may even get to experience the uncovered ruins of King Haakon Haakonsson’s 13th century Royal Hall. “It’s one of only four such ruins in Norway, and thus rather special,” she concludes.