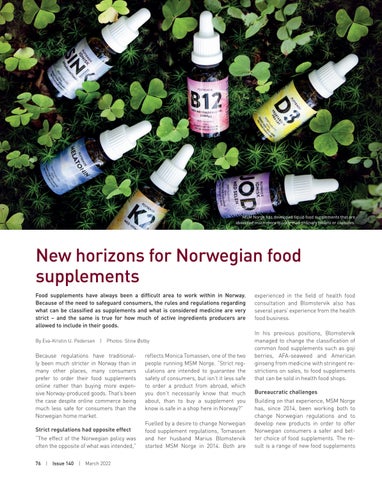 MSM Norge has developed liquid food supplements that are absorbed much more quickly than ordinary tablets or capsules.

New horizons for Norwegian food supplements Food supplements have always been a difficult area to work within in Norway. Because of the need to safeguard consumers, the rules and regulations regarding what can be classified as supplements and what is considered medicine are very strict – and the same is true for how much of active ingredients producers are allowed to include in their goods. By Eva-Kristin U. Pedersen

Because regulations have traditionally been much stricter in Norway than in many other places, many consumers prefer to order their food supplements online rather than buying more expensive Norway-produced goods. That’s been the case despite online commerce being much less safe for consumers than the Norwegian home market. Strict regulations had opposite effect “The effect of the Norwegian policy was often the opposite of what was intended,” 76 |

reflects Monica Tomassen, one of the two people running MSM Norge. “Strict regulations are intended to guarantee the safety of consumers, but isn’t it less safe to order a product from abroad, which you don’t necessarily know that much about, than to buy a supplement you know is safe in a shop here in Norway?” Fuelled by a desire to change Norwegian food supplement regulations, Tomassen and her husband Marius Blomstervik started MSM Norge in 2014. Both are

experienced in the field of health food consultation and Blomstervik also has several years’ experience from the health food business. In his previous positions, Blomstervik managed to change the classification of common food supplements such as goji berries, AFA-seaweed and American ginseng from medicine with stringent restrictions on sales, to food supplements that can be sold in health food shops. Bureaucratic challenges Building on that experience, MSM Norge has, since 2014, been working both to change Norwegian regulations and to develop new products in order to offer Norwegian consumers a safer and better choice of food supplements. The result is a range of new food supplements