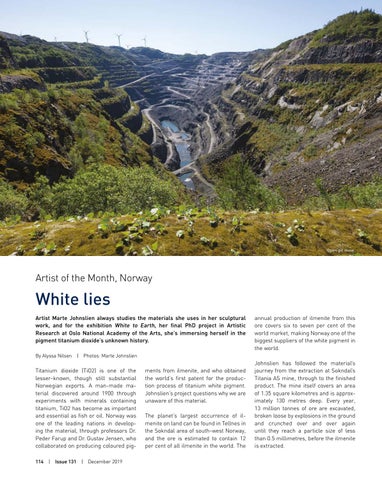 Artist of the Month, Norway

White lies Artist Marte Johnslien always studies the materials she uses in her sculptural work, and for the exhibition White to Earth, her final PhD project in Artistic Research at Oslo National Academy of the Arts, she’s immersing herself in the pigment titanium dioxide’s unknown history.

annual production of ilmenite from this ore covers six to seven per cent of the world market, making Norway one of the biggest suppliers of the white pigment in the world.

Titanium dioxide (TiO2) is one of the lesser-known, though still substantial Norwegian exports. A man-made material discovered around 1900 through experiments with minerals containing titanium, TiO2 has become as important and essential as fish or oil. Norway was one of the leading nations in developing the material, through professors Dr. Peder Farup and Dr. Gustav Jensen, who collaborated on producing coloured pig114  |  Issue 131  |  December 2019

ments from ilmenite, and who obtained the world’s first patent for the production process of titanium white pigment. Johnslien’s project questions why we are unaware of this material. The planet’s largest occurrence of ilmenite on land can be found in Tellnes in the Sokndal area of south-west Norway, and the ore is estimated to contain 12 per cent of all ilmenite in the world. The

Johnslien has followed the material’s journey from the extraction at Sokndal’s Titania AS mine, through to the finished product. The mine itself covers an area of 1.35 square kilometres and is approximately 130 metres deep. Every year, 13 million tonnes of ore are excavated, broken loose by explosions in the ground and crunched over and over again until they reach a particle size of less than 0.5 millimetres, before the ilmenite is extracted.

From pampering skincare and spa treatments to delicious food and drink and a list of must-watch Nordic films, this issue presents a number of ways for you to kick back, relax and look after yourself this festive break. For those already planning their 2020 winter adventure, we also list the best spots for northern lights hunting, as well as our favourite winter destinations in Sweden. Finally, our cover star has just been announced as the bookies favourite for winning Melodifestivalen and going on to represent Sweden at the Eurovision Song Contest, in addition to being all over the radio waves and featuring in two series currently on Netflix. Read on for an inspired, fun-filled winter ahead!