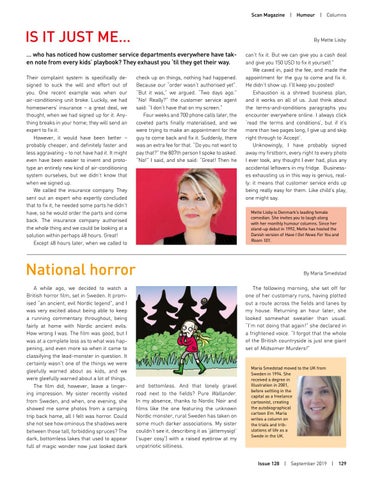 … who has noticed how customer service departments everywhere have taken note from every kids’ playbook? They exhaust you ‘til they get their way. Their complaint system is specifically designed to suck the will and effort out of you. One recent example was when our air-conditioning unit broke. Luckily, we had homeowners’ insurance – a great deal, we thought, when we had signed up for it. Anything breaks in your home; they will send an expert to fix it. However, it would have been better – probably cheaper, and definitely faster and less aggravating – to not have had it. It might even have been easier to invent and prototype an entirely new kind of air-conditioning system ourselves, but we didn’t know that when we signed up. We called the insurance company. They sent out an expert who expertly concluded that to fix it, he needed some parts he didn’t have, so he would order the parts and come back. The insurance company authorised the whole thing and we could be looking at a solution within perhaps 48 hours. Great! Except 48 hours later, when we called to

check up on things, nothing had happened. Because our “order wasn’t authorised yet”. “But it was,” we argued. “Two days ago.” “No! Really?” the customer service agent said: “I don’t have that on my screen.” Four weeks and 700 phone calls later, the coveted parts finally materialised, and we were trying to make an appointment for the guy to come back and fix it. Suddenly, there was an extra fee for that. “Do you not want to pay that?” the 807th person I spoke to asked. “No!” I said, and she said: “Great! Then he

National horror A while ago, we decided to watch a British horror film, set in Sweden. It promised “an ancient, evil Nordic legend”, and I was very excited about being able to keep a running commentary throughout, being fairly at home with Nordic ancient evils. How wrong I was. The film was good, but I was at a complete loss as to what was happening, and even more so when it came to classifying the lead-monster in question. It certainly wasn’t one of the things we were gleefully warned about as kids, and we were gleefully warned about a lot of things. The film did, however, leave a lingering impression. My sister recently visited from Sweden, and when, one evening, she showed me some photos from a camping trip back home, all I felt was horror. Could she not see how ominous the shadows were between those tall, forbidding spruces? The dark, bottomless lakes that used to appear full of magic wonder now just looked dark

can’t fix it. But we can give you a cash deal and give you 150 USD to fix it yourself.” We caved in, paid the fee, and made the appointment for the guy to come and fix it. He didn’t show up. I’ll keep you posted! Exhaustion is a shrewd business plan, and it works on all of us. Just think about the terms-and-conditions paragraphs you encounter everywhere online. I always click ‘read the terms and conditions’, but if it’s more than two pages long, I give up and skip right through to ‘Accept’. Unknowingly, I have probably signed away my firstborn, every right to every photo I ever took, any thought I ever had, plus any accidental leftovers in my fridge. Businesses exhausting us in this way is genius, really: it means that customer service ends up being really easy for them. Like child’s play, one might say.

The following morning, she set off for one of her customary runs, having plotted out a route across the fields and lanes by my house. Returning an hour later, she looked somewhat sweatier than usual. “I’m not doing that again!” she declared in a frightened voice. “I forgot that the whole of the British countryside is just one giant set of Midsomer Murders!”

and bottomless. And that lonely gravel road next to the fields? Pure Wallander. In my absence, thanks to Nordic Noir and films like the one featuring the unknown Nordic monster, rural Sweden has taken on some much darker associations. My sister couldn’t see it, describing it as ‘jättemysigt’ (‘super cosy’) with a raised eyebrow at my unpatriotic silliness.

The September issue of Scan Magazine aims to nurse you into the cooler, darker season with a design section full of hygge and a brand-new cu...

The September issue of Scan Magazine aims to nurse you into the cooler, darker season with a design section full of hygge and a brand-new cu...