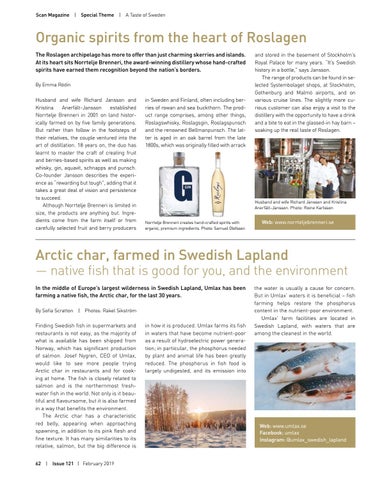 Organic spirits from the heart of Roslagen The Roslagen archipelago has more to offer than just charming skerries and islands. At its heart sits Norrtelje Brenneri, the award-winning distillery whose hand-crafted spirits have earned them recognition beyond the nation’s borders. By Emma Rödin

Husband and wife Richard Jansson and Kristina Anerfält-Jansson established Norrtelje Brenneri in 2001 on land historically farmed on by five family generations. But rather than follow in the footsteps of their relatives, the couple ventured into the art of distillation. 18 years on, the duo has learnt to master the craft of creating fruit and berries-based spirits as well as making whisky, gin, aquavit, schnapps and punsch. Co-founder Jansson describes the experience as “rewarding but tough”, adding that it takes a great deal of vision and persistence to succeed. Although Norrtelje Brenneri is limited in size, the products are anything but. Ingredients come from the farm itself or from carefully selected fruit and berry producers

in Sweden and Finland, often including berries of rowan and sea buckthorn. The product range comprises, among other things, Roslagswhisky, Roslagsgin, Roslagspunsch and the renowned Bellmanpunsch. The latter is aged in an oak barrel from the late 1800s, which was originally filled with arrack

and stored in the basement of Stockholm’s Royal Palace for many years. “It’s Swedish history in a bottle,” says Jansson. The range of products can be found in selected Systembolaget shops, at Stockholm, Gothenburg and Malmö airports, and on various cruise lines. The slightly more curious customer can also enjoy a visit to the distillery with the opportunity to have a drink and a bite to eat in the glassed-in hay barn – soaking up the real taste of Roslagen.

— native fish that is good for you, and the environment In the middle of Europe’s largest wilderness in Swedish Lapland, Umlax has been farming a native fish, the Arctic char, for the last 30 years. By Sofia Scratton  |  Photos: Rakel Sikström

Finding Swedish fish in supermarkets and restaurants is not easy, as the majority of what is available has been shipped from Norway, which has significant production of salmon. Josef Nygren, CEO of Umlax, would like to see more people trying Arctic char in restaurants and for cooking at home. The fish is closely related to salmon and is the northernmost freshwater fish in the world. Not only is it beautiful and flavoursome, but it is also farmed in a way that benefits the environment. The Arctic char has a characteristic red belly, appearing when approaching spawning, in addition to its pink flesh and fine texture. It has many similarities to its relative, salmon, but the big difference is 62  |  Issue 121 | February 2019

in how it is produced. Umlax farms its fish in waters that have become nutrient-poor as a result of hydroelectric power generation; in particular, the phosphorus needed by plant and animal life has been greatly reduced. The phosphorus in fish food is largely undigested, and its emission into

the water is usually a cause for concern. But in Umlax’ waters it is beneficial – fish farming helps restore the phosphorus content in the nutrient-poor environment. Umlax’ farm facilities are located in Swedish Lapland, with waters that are among the cleanest in the world.