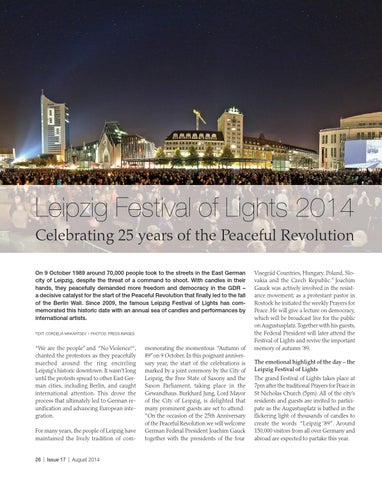 Leipzig Festival of Lights 2014 Celebrating 25 years of the Peaceful Revolution On 9 October 1989 around 70,000 people took to the streets in the East German city of Leipzig, despite the threat of a command to shoot. With candles in their hands, they peacefully demanded more freedom and democracy in the GDR – a decisive catalyst for the start of the Peaceful Revolution that finally led to the fall of the Berlin Wall. Since 2009, the famous Leipzig Festival of Lights has commemorated this historic date with an annual sea of candles and performances by international artists. TEXT: CORDELIA MAKARTSEV | PHOTOS: PRESS IMAGES

“We are the people” and “No Violence!“, chanted the protestors as they peacefully marched around the ring encircling Leipzig’s historic downtown. It wasn’t long until the protests spread to other East German cities, including Berlin, and caught international attention. This drove the process that ultimately led to German reunification and advancing European integration. For many years, the people of Leipzig have maintained the lively tradition of com-

memorating the momentous “Autumn of 89”on 9 October. In this poignant anniversary year, the start of the celebrations is marked by a joint ceremony by the City of Leipzig, the Free State of Saxony and the Saxon Parliament, taking place in the Gewandhaus. Burkhard Jung, Lord Mayor of the City of Leipzig, is delighted that many prominent guests are set to attend: “On the occasion of the 25th Anniversary of the Peaceful Revolution we will welcome German Federal President Joachim Gauck together with the presidents of the four

Visegrád Countries, Hungary, Poland, Slovakia and the Czech Republic.” Joachim Gauck was actively involved in the resistance movement; as a protestant pastor in Rostock he initiated the weekly Prayers for Peace. He will give a lecture on democracy, which will be broadcast live for the public on Augustusplatz.Together with his guests, the Federal President will later attend the Festival of Lights and revive the important memory of autumn ’89. The emotional highlight of the day – the Leipzig Festival of Lights The grand Festival of Lights takes place at 7pm after the traditional Prayers for Peace in St Nicholas Church (5pm). All of the city’s residents and guests are invited to participate as the Augustusplatz is bathed in the flickering light of thousands of candles to create the words “Leipzig ‘89”. Around 150,000 visitors from all over Germany and abroad are expected to partake this year.