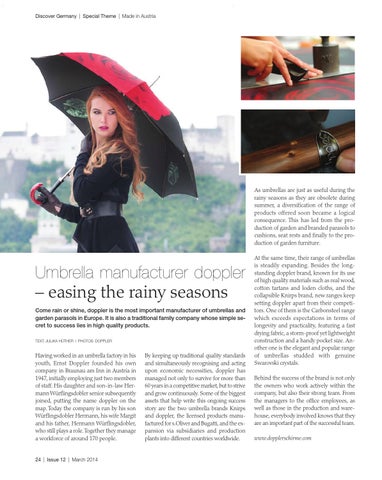 Umbrella manufacturer doppler – easing the rainy seasons Come rain or shine, doppler is the most important manufacturer of umbrellas and garden parasols in Europe. It is also a traditional family company whose simple secret to success lies in high quality products. TEXT: JULIKA HÜTHER | PHOTOS: DOPPLER

Having worked in an umbrella factory in his youth, Ernst Doppler founded his own company in Braunau am Inn in Austria in 1947, initially employing just two members of staff. His daughter and son-in-law Hermann Würflingsdobler senior subsequently joined, putting the name doppler on the map. Today the company is run by his son Würflingsdobler Hermann, his wife Margit and his father, Hermann Würflingsdobler, who still plays a role.Together they manage a workforce of around 170 people.

By keeping up traditional quality standards and simultaneously recognising and acting upon economic necessities, doppler has managed not only to survive for more than 60 years in a competitive market, but to strive and grow continuously. Some of the biggest assets that help write this ongoing success story are the two umbrella brands Knirps and doppler, the licensed products manufactured for s.Oliver and Bugatti, and the expansion via subsidiaries and production plants into different countries worldwide.

At the same time, their range of umbrellas is steadily expanding. Besides the longstanding doppler brand, known for its use of high quality materials such as real wood, cotton tartans and loden cloths, and the collapsible Knirps brand, new ranges keep setting doppler apart from their competitors. One of them is the Carbonsteel range which exceeds expectations in terms of longevity and practicality, featuring a fast drying fabric, a storm-proof yet lightweight construction and a handy pocket size. Another one is the elegant and popular range of umbrellas studded with genuine Swarovski crystals. Behind the success of the brand is not only the owners who work actively within the company, but also their strong team. From the managers to the office employees, as well as those in the production and warehouse, everybody involved knows that they are an important part of the successful team. www.dopplerschirme.com