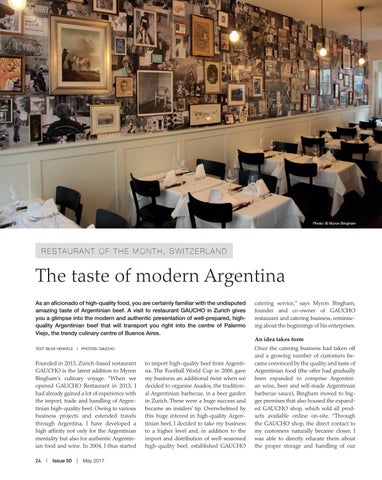 The taste of modern Argentina As an aficionado of high-quality food, you are certainly familiar with the undisputed amazing taste of Argentinian beef. A visit to restaurant GAUCHO in Zurich gives you a glimpse into the modern and authentic presentation of well-prepared, highquality Argentinian beef that will transport you right into the centre of Palermo Viejo, the trendy culinary centre of Buenos Aires.

catering service,” says Myron Bingham, founder and co-owner of GAUCHO restaurant and catering business, reminiscing about the beginnings of his enterprises.

Once the catering business had taken off and a growing number of customers became convinced by the quality and taste of Argentinian food (the offer had gradually been expanded to comprise Argentinian wine, beer and self-made Argentinian barbecue sauce), Bingham moved to bigger premises that also housed the expanded GAUCHO shop, which sold all products available online on-site. “Through the GAUCHO shop, the direct contact to my customers naturally became closer. I was able to directly educate them about the proper storage and handling of our

Founded in 2013, Zurich-based restaurant GAUCHO is the latest addition to Myron Bingham’s culinary voyage. “When we opened GAUCHO Restaurant in 2013, I had already gained a lot of experience with the import, trade and handling of Argentinian high-quality beef. Owing to various business projects and extended travels through Argentina, I have developed a high affinity not only for the Argentinian mentality but also for authentic Argentinian food and wine. In 2004, I thus started 24  |  Issue 50  |  May 2017

to import high-quality beef from Argentina. The Football World Cup in 2006 gave my business an additional twist when we decided to organise Asados, the traditional Argentinian barbecue, in a beer garden in Zurich. These were a huge success and became an insiders’ tip. Overwhelmed by this huge interest in high-quality Argentinian beef, I decided to take my business to a higher level and, in addition to the import and distribution of well-seasoned high-quality beef, established GAUCHO