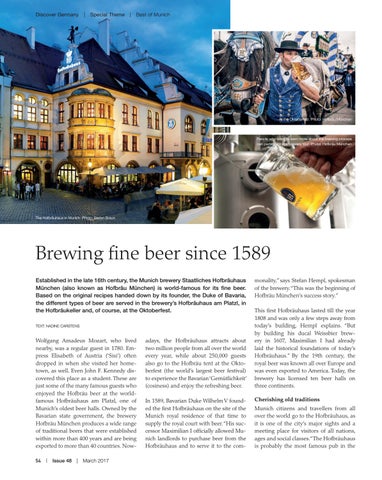 At the Oktoberfest. Photo: Hofbräu München

People who want to learn more about the brewing process can participate in a brewery tour. Photo: Hofbräu München

Brewing fine beer since 1589 Established in the late 16th century, the Munich brewery Staatliches Hofbräuhaus München (also known as Hofbräu München) is world-famous for its fine beer. Based on the original recipes handed down by its founder, the Duke of Bavaria, the different types of beer are served in the brewery’s Hofbräuhaus am Platzl, in the Hofbräukeller and, of course, at the Oktoberfest. TEXT: NADINE CARSTENS

Wolfgang Amadeus Mozart, who lived nearby, was a regular guest in 1780. Empress Elisabeth of Austria (‘Sisi’) often dropped in when she visited her hometown, as well. Even John F. Kennedy discovered this place as a student. These are just some of the many famous guests who enjoyed the Hofbräu beer at the worldfamous Hofbräuhaus am Platzl, one of Munich’s oldest beer halls. Owned by the Bavarian state government, the brewery Hofbräu München produces a wide range of traditional beers that were established within more than 400 years and are being exported to more than 40 countries. Now54  |  Issue 48  |  March 2017

adays, the Hofbräuhaus attracts about two million people from all over the world every year, while about 250,000 guests also go to the Hofbräu tent at the Oktoberfest (the world’s largest beer festival) to experience the Bavarian ‘Gemütlichkeit’ (cosiness) and enjoy the refreshing beer. In 1589, Bavarian Duke Wilhelm V founded the first Hofbräuhaus on the site of the Munich royal residence of that time to supply the royal court with beer. “His successor Maximilian I officially allowed Munich landlords to purchase beer from the Hofbräuhaus and to serve it to the com-

monality,” says Stefan Hempl, spokesman of the brewery. “This was the beginning of Hofbräu München’s success story.” This first Hofbräuhaus lasted till the year 1808 and was only a few steps away from today’s building, Hempl explains. “But by building his ducal Weissbier brewery in 1607, Maximilian I had already laid the historical foundations of today’s Hofbräuhaus.” By the 19th century, the royal beer was known all over Europe and was even exported to America. Today, the brewery has licensed ten beer halls on three continents. Cherishing old traditions Munich citizens and travellers from all over the world go to the Hofbräuhaus, as it is one of the city’s major sights and a meeting place for visitors of all nations, ages and social classes.“The Hofbräuhaus is probably the most famous pub in the