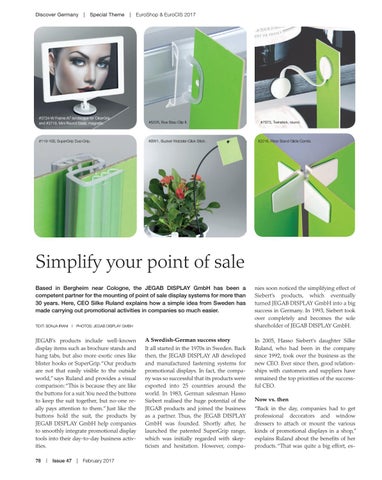 Simplify your point of sale Based in Bergheim near Cologne, the JEGAB DISPLAY GmbH has been a competent partner for the mounting of point of sale display systems for more than 30 years. Here, CEO Silke Ruland explains how a simple idea from Sweden has made carrying out promotional activities in companies so much easier. TEXT: SONJA IRANI  I  PHOTOS: JEGAB DISPLAY GMBH

JEGAB’s products include well-known display items such as brochure stands and hang tabs, but also more exotic ones like blister hooks or SuperGrip. “Our products are not that easily visible to the outside world,” says Ruland and provides a visual comparison: “This is because they are like the buttons for a suit.You need the buttons to keep the suit together, but no-one really pays attention to them.” Just like the buttons hold the suit, the products by JEGAB DISPLAY GmbH help companies to smoothly integrate promotional display tools into their day-to-day business activities. 78  |  Issue 47  |  February 2017

A Swedish-German success story It all started in the 1970s in Sweden. Back then, the JEGAB DISPLAY AB developed and manufactured fastening systems for promotional displays. In fact, the company was so successful that its products were exported into 25 countries around the world. In 1983, German salesman Hasso Siebert realised the huge potential of the JEGAB products and joined the business as a partner. Thus, the JEGAB DISPLAY GmbH was founded. Shortly after, he launched the patented SuperGrip range, which was initially regarded with skepticism and hesitation. However, compa-

nies soon noticed the simplifying effect of Siebert’s products, which eventually turned JEGAB DISPLAY GmbH into a big success in Germany. In 1993, Siebert took over completely and becomes the sole shareholder of JEGAB DISPLAY GmbH. In 2005, Hasso Siebert’s daughter Silke Ruland, who had been in the company since 1992, took over the business as the new CEO. Ever since then, good relationships with customers and suppliers have remained the top priorities of the successful CEO. Now vs. then “Back in the day, companies had to get professional decorators and window dressers to attach or mount the various kinds of promotional displays in a shop,” explains Ruland about the benefits of her products. “That was quite a big effort, es-