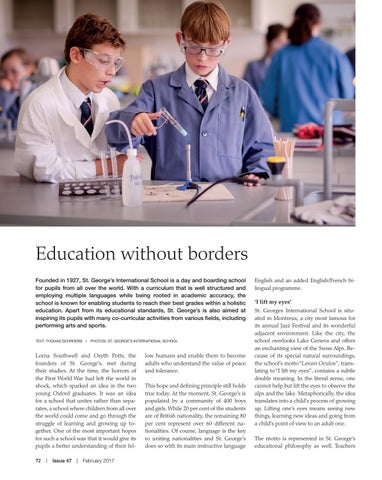 Education without borders Founded in 1927, St. George’s International School is a day and boarding school for pupils from all over the world. With a curriculum that is well structured and employing multiple languages while being rooted in academic accuracy, the school is known for enabling students to reach their best grades within a holistic education. Apart from its educational standards, St. George’s is also aimed at inspiring its pupils with many co-curricular activities from various fields, including performing arts and sports. TEXT: THOMAS SCHROERS  I  PHOTOS: ST. GEORGE’S INTERNATIONAL SCHOOL

Lorna Southwell and Osyth Potts, the founders of St. George’s, met during their studies. At the time, the horrors of the First World War had left the world in shock, which sparked an idea in the two young Oxford graduates. It was an idea for a school that unites rather than separates, a school where children from all over the world could come and go through the struggle of learning and growing up together. One of the most important hopes for such a school was that it would give its pupils a better understanding of their fel72  |  Issue 47  |  February 2017

low humans and enable them to become adults who understand the value of peace and tolerance. This hope and defining principle still holds true today. At the moment, St. George’s is populated by a community of 400 boys and girls. While 20 per cent of the students are of British nationality, the remaining 80 per cent represent over 60 different nationalities. Of course, language is the key to uniting nationalities and St. George’s does so with its main instructive language

English and an added English/French bilingual programme. ‘I lift my eyes’ St. Georges International School is situated in Montreux, a city most famous for its annual Jazz Festival and its wonderful adjacent environment. Like the city, the school overlooks Lake Geneva and offers an enchanting view of the Swiss Alps. Because of its special natural surroundings, the school’s motto “Levavi Oculos”, translating to “I lift my eyes”, contains a subtle double meaning. In the literal sense, one cannot help but lift the eyes to observe the alps and the lake. Metaphorically, the idea translates into a child’s process of growing up. Lifting one’s eyes means seeing new things, learning new ideas and going from a child’s point of view to an adult one. The motto is represented in St. George’s educational philosophy as well. Teachers